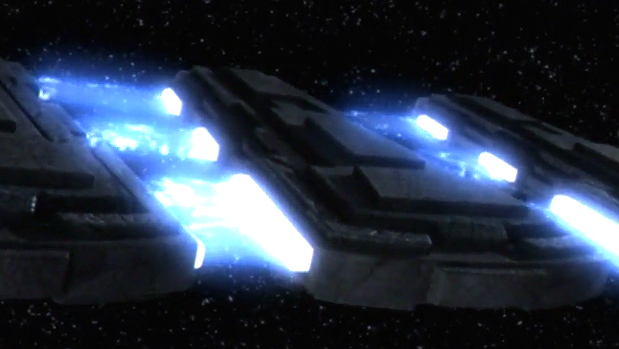 The sections appear to be self-guided and are virtually indestructible. A full collision with a Ha'tak destroys the ship but leaves the Supergate component entirely intact. This fact appears to indicate that the units do not account for obstructions between themselves and the positions in space where they wish to establish the Supergate.

Segments appear to be larger when taking their place in the formation of a Supergate than they are upon emerging from a standard Stargate. It is likely that they come through in a compact form (similar to a Puddle Jumper retracting its drive pods) and then "telescope" outward during the journey out of the planet's atmosphere.

Beachhead - Following the Ori force field's completion countless components emerge through the Stargate to form the Supergate beyond the barrier.
Camelot - SG-1 and its allies find an already assembled Supergate, and cannot prevent the Ori from successfully dialing in from their home galaxy.