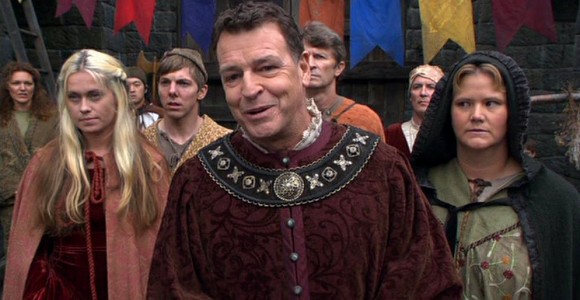 SG-1 discovers the village of Camelot on an alien world, and must face Merlin's security system when they go in search of an Ancient weapon. Elsewhere, Earth and its allies assemble a fleet when a working Ori Supergate is discovered.

Out looking for Merlin's anti-Ori weapon ("Arthur's Mantle"), Colonels Mitchell and Carter, Teal'c, and Daniel Jackson come upon an Arthurian-style village. Passing through its gate, Jackson spies a sword in a stone, a sword identical to the one Mitchell removed from a stone under Glastonbury ("Avalon, Part 2"). Meurik, the governor of the village, welcomes them to Camelot.

Antonius, the village historian, explains that Merlin – regarded by their people as a wizard of darkness – is rarely mentioned. His library has remained sealed since his departure, about the time Arthur left in pursuit of the Sangraal – the Holy Grail. The library is protected by a powerful curse – a Black Knight. Mitchell, having defeated one of Merlin's knights before ("Avalon, Part 2"), is not impressed, although Teal'c and the others suggest this challenge left by the once ascended Ancient scientist may be different.

Searching for the library, Mitchell and Jackson spot a teenage girl and a young boy engaged in sword-play. Mitchell offers the girl, Valencia, a few pointers and asks if they know where Merlin's library is located. The pair take Jackson and Mitchell to the library. The door is protected by magic, but Valencia tells them that the key is in the archive. Antonius initially refuses to help ... but his own curiosity and Jackson's explanation prompt him to help SG-1 secretly enter the library.

Daniel immediately starts scanning the many texts and dusty scrolls stashed everywhere. He suggests that any kind of technology could be hidden in the room. Dubious, Mitchell pulls a book from a shelf, inadvertently opening a secret door.

Clutching a book, Antonius takes his leave and returns home as SG-1 heads into the hidden chamber. As in the Avalon cave under Glastonbury in England, fires in the fireplace and wall sconces ignite. SG-1 examines a large stone structure in the middle of the room – an Ancient control pedestal, similar to those the team has previously encountered ("Window of Opportunity," "Reckoning, Part 2"). It activates as Daniel steps onto the platform at its base.

Back at the old historian's home, the Black Knight appears and slays Antonius.

Mitchell wanders out to the sword in the stone. Valencia reveals that only he who is pure of heart and true of spirit can pull the sword from the stone. Arthur will not return from his quest until someone in the village can remove the sword.

When Antonius's murder is discovered, Meurik orders SG-1 out of town even as Jackson tries to explain that there is no magic involved. As he utters the words, SG-1 is beamed aboard the Odyssey. The Jaffa have located the Supergate near P3Y-229 – a gate that will allow the worshipers of the Ori to bring their assault fleet into our galaxy. An assault is being planned.

Jackson and Mitchell decide to stay behind to search for the anti-Ori weapon, and beam back into the library. They will be picked up by the Russians in their new space vessel, the Korolev ("Crusade"), on its way to the Supergate. While Earth marshals a fleet of its allies – the Asgard, the Tok'ra, and the Free Jaffa – to meet the invaders at the Supergate, Teal'c takes an unmarked cargo ship and heads off in pursuit of other potential allies.

When Jackson locates the code for (hopefully) deactivating the Black Knight, the pair proceed to the control panel and activate it. Screams alert them to the appearance of the knight outside in the village. Convinced he can handle the holographic warrior, Mitchell dashes off. But shots from his P-90 has right through the knight.

Valencia sees Mitchell unsuccessfully battling the knight. She rushes to the sword in the stone, pulls it out, and tosses it to Mitchell. Caked in mud, he fights while Daniel manipulates the device, which activates the Merlin hologram and reveals a room full of hidden treasure. But the knight persists. He is about to kill Mitchell when Daniel finds the control crystals, and decides to destroy them with his handgun.

Meanwhile, Teal'c allows himself to be captured in order to bring the Lucian Alliance into the fray. He confronts their leader, Netan, and convinces him to bring the Alliance fleet to the Supergate.

As the Odyssey arrives at the Supergate, the Asgard scientist Kvasir transports aboard. The Asgard have analyzed the data from the phase-shifting device ("Arthur's Mantle"). They believe that Merlin's anti-Ori weapon is a device that can shift energy to the dimension occupied by ascended beings – killing the non-corporeal entities essentially like one wave cancelling out another. Hopefully the followers of the Ori will cease their invasion of our galaxy if their gods are dead – but first they must find a way to get the weapon to the Ori galaxy, assuming Daniel and Cameron manage to find it.

Carter and Kvasir conclude that the Supergate can dial out and send the weapon to the Ori galaxy, if they can activate it before the Ori followers do. Since the gate draws its power from a singularity and doesn't have the 38-minute time limit of a normal Stargate, just dialing out could prevent the Ori from dialing into the Milky Way indefinitely. Carter puts on an E.V.A. suit and beams over to the gate to exchange control crystals.

Back in Camelot, Meurik and the villagers enter Merlin's secret room. Jackson asks if they recognize the pendant Merlin wears. Merlin's holographic recording has led Daniel to suspect that the anti-Ori weapon may be the pendant itself – but it is not to be found among the treasure in the room. Meurik tells them that it is the Holy Grail, and that Arthur went seeking it. And now that the sword has been pulled from the stone, Arthur will soon be returning.

As Jackson again tries to explain there is no magic involved in the Black Knight, he and Mitchell are beamed aboard the Korolev.

Carter begins initialization of the new control crystal. But suddenly the massive gate activates, preventing Odyssey from beaming Carter back aboard. The Korolev drops out of hyperspace just as four Ori warships come through the gate. The Ori transmit a passage from the Book of Origin regarding the coming decimation. Daniel, familiar with the holy book ("Origin"), sends a counter passage, suggesting they are wrong to do this.

And they believe that these four ships are only the first wave, or perhaps even a scouting party. Mitchell receives permission to scramble the F-302s aboard the Korolev. Jackson takes a navigation console chair just as Teal'c and the ships of the Lucian Alliance arrive. The Ori ships withstand the combined assault. From her vantage point in space by the gate, Colonel Carter watches as one of Earth's Daedalus-class ships is destroyed.

On board one of the Ori ships, Vala Mal Doran watches with the same horror welling within. Her child, "the will of the Ori," will soon be born.