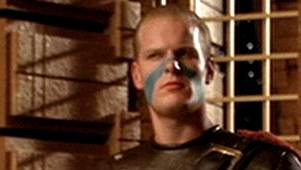 A powerful Goa'uld System Lord, Svarog rules several planets and is not afraid to take chances when he believes threats are minimal. Svarog was one of the System Lords who joined in the summit to discuss the latest threat against the empire. He voted to have Anubis rejoin their ranks, though he was not active in the debates.

Svarog led his forces into a campaign to take over the planet Latona when he saw no sign of "the Sentinel," an advanced piece of technology that once protected the world. But in the middle of his invasion, SG-1 reactivated the Sentinel and Svarog's forces vanished. It is not clear whether or not Svarog himself, who remained aboard the orbiting vessel, was killed by the device or simply sent away from the planet.