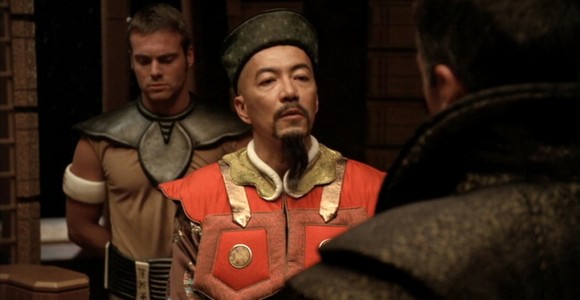 The Tok'ra send Daniel Jackson to a secret meeting between the System Lords, unaware that a new power is about to attack the Tok'ra homeworld.

Deep in outer space, a small swarm of Goa'uld ships come together. The Goa'uld Zipacna – formerly in the service of Apophis and his son Klorel, but now allied with a mysterious and powerful Goa'uld – welcomes his guest. It is Osiris, recently escaped from Earth, who has taken Sarah Gardner – Daniel Jackson's former girlfriend – as her host ("The Curse").

Zipacna offers her a position in service to this powerful Goa'uld, finally revealing his name: Anubis.

Back on Earth, the S.G.C. welcomes Tok'ra Councilwoman Ren'al. She has a mission for the team – for Dr. Jackson, actually, because he speaks fluent Goa'uld. The System Lords have been fighting each other more fiercely since the deaths of Cronus ("Double Jeopardy") and Apophis ("Enemies") left a power vacuum. Now, they have declared a truce and agreed to meet on a neutral space station.

The Tok'ra intend to kill all of them with a chemically-engineered poison, dealing the Goa'uld a blow from which they may never recover. Daniel is to be their means of delivery.

SG-1 journeys to the planet Revanna, the new Tok'ra homeworld. Deep underground in the Tok'ra's hidden network of caves, Jacob Carter discusses the plan. He's spent the last several months establishing himself as a minor Goa'uld in the service of Yu, a powerful System Lord ("Fair Game"). He can get Daniel inside Yu's home base, where he will use the Reole memory-altering chemical ("The Fifth Man") to convince Yu that he is Jarren, Yu's closest human slave (called a "lo'taur").

The plan works, and after Daniel pokes him with a ring designed to deliver the chemical, Yu is convinced that Daniel is Jarren. The two depart for the summit of the System Lords, and find six of the galaxy's most powerful figures waiting: Baal, Olokun, Morrigan, Bastet, Kali the Destroyer, and Svarog. The System Lords are still waiting, though, for another guest – the powerful Goa'uld who has been dealing them all heavy defeats in battle, but who refuses to make his identity known.

Inside the Tok'ra base, Ren'al shows Major Samantha Carter the chamber that is keeping the symbiote Lantash alive. Lantash was symbiote to Martouf, a close friend of Carter's who was killed more than a year ago ("Divide and Conquer"). Ren'al explains that Martouf's body was kept in stasis for months, but Lantash was eventually removed so that both host and symbiote would not die.

Osiris prepares to depart Zipacna's ship for the summit, as Anubis' official representative. Zipacna, meanwhile, has learned the location of the new Tok'ra homeworld from a captured spy. He launches a full-scale invasion of Revanna.

SG-1 and SG-17 (including the S.G.C.'s newest officer, Lieutenant Elliot) try to help the Tok'ra, but little can be done. The Goa'uld have dialed in to Revanna's Stargate, preventing their escape. The Tok'ra have relied on secrecy and subterfuge to survive for thousands of years – and now, they have neither.

The Goa'uld continue bombing runs over the surface of Revanna, in an attempt to flush the resistance fighters out of their secret tunnels. Fragments of rock and crystal continue to collapse, killing Tok'ra and blocking passages. One assault kills Ren'al and destroys Lantash's holding tank, forcing him to take the dying Lieutenant Elliot as a host. The rest of SG-17 is killed as well.

O'Neill, Teal'c and the Tok'ra Aldwin head for the surface, where they find an army of Jaffa troops amassing. They are preparing to enter the exposed tunnels and destroy the Tok'ra. They flee from an attacking death glider, but Aldwin is killed.

On the space station, Jackson is stunned when the final guest arrives: Sarah, now possessed by Osiris. She sees him and recognizes him, but does not reveal his identity to the others – an ace up her sleeve. Daniel communicates her arrival to Jacob, who is waiting nearby in a cargo ship, but is confronted in his private quarters by Osiris.

On Revanna, Elliot / Lantash can be of little help to SG-1 as they try to escape. Another bombing run blocks the only way to the surface, leaving them trapped underground.