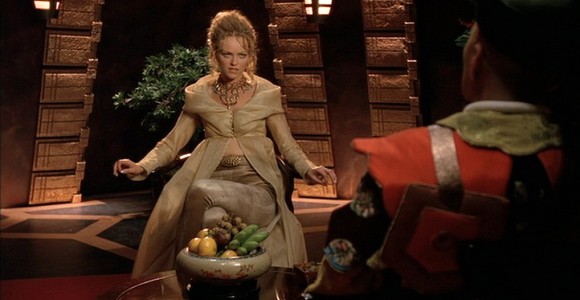 Dr. Jackson's undercover mission to a Goa'uld summit is complicated by the arrival of a surprise guest. Meanwhile, the rest of the team is buried under the surface of the Tok'ra homeworld after a Goa'uld attack.

The Goa'uld Osiris has arrived on the space station where the System Lords are negotiating an alliance, and has recognized Daniel Jackson – undercover on a mission to wipe them out with a Goa'uld-killing poison. But Osiris (who has taken Daniel's ex-girlfriend Sarah as his host ["The Curse"]) does not tip her hand to the other System Lords, and confronts Jackson privately.

Osiris demands to know what Jackson is planning, but he manages to prick her with his ring, delivering a dose of the memory-altering chemical developed by the Tok'ra. He convinces her that he is Yu's servant, and she leaves, somewhat confused.

On the planet Revanna, the Goa'uld Zipacna and his army of Jaffa (representing Anubis) viciously assault the secret Tok'ra base. Many Tok'ra have been killed, and the rest of SG-1 – along with Lieutenant Elliot, who has been critically injured and taken by the Tok'ra symbiote Lantash – are trapped in the underground tunnels.

Jack O'Neill and Teal'c return to the laboratory to find the crystals used by the Tok'ra to grow the tunnels, while Major Samantha Carter tries to help Elliot stay alive. Elliot tells her that Lantash loves her, forcing Sam to face her unfinished business with Martouf – Lantash's previous host, who Sam was forced to kill ("Divide and Conquer").

Dr. Jackson listens as Osiris makes her case before the System Lords. She represents an infamous Goa'uld called Anubis, who was believed to have been killed a thousand years ago, but who has returned with a vengeance. Anubis has amassed a powerful army, and dealt blows to each of the seven System Lords in attendance. She asks that they reinstate Anubis as a System Lord, and allow her to represent him at the summit.

Daniel reports this to Jacob Carter, who is waiting for him near the station in a Goa'uld cargo ship. They agree that the plan must be aborted – they cannot wipe out the seven most powerful System Lords now, or Anubis will be free to conquer the galaxy. Jacob tells Daniel to learn all he can before he leaves. Daniel, meanwhile, is worried about what the Goa'uld will do to their human slaves after the summit, now that they have learned so much about their plans.

SG-1 and Elliot make it to the surface of Revanna using the Tok'ra crystals, but must avoid the Jaffa army that is searching for them. Knowing that Jacob and Daniel will soon return, they begin the 25-mile walk to a Tok'ra beacon, to send a signal for help. Elliot remains near death.

The Goa'uld vote to allow Anubis to rejoin them, and to allow Osiris to represent his vote at the summit. Only Yu votes against Anubis' reinstatement. The System Lords then each pull a live symbiote out of a holding container. Daniel fears that they plan to infest their human slaves, but is shocked to see them bite into and devour their own kind.

The rest of the team finally makes it to the beacon, and Carter modifies it to signal Jacob and Daniel once they return. Lantash, though, no longer believes he has the strength to save Elliot's life. They will both die soon.

Jacob demands that Daniel prepare to escape the space station, but Dr. Jackson has a new plan. He invites Osiris to Yu's docked ship for a personal meeting with the System Lord. When she arrives, he locks her up and moves to steal the ship – knowing the Tok'ra have the ability to forcibly remove a symbiote from its host ("Pretense").

Yu is there waiting. He attacks Jackson, believing only that his servant Jarren has betrayed him, and lets Osiris out. Believing that Yu was plotting to kidnap her, Osiris reveals a hidden knife and stabs him. She attacks Jackson, who reveals his true identity in the hope that Sarah will be able to influence Osiris. Yu pulls her off of Daniel, and he rushes to an escape pod.

Jacob picks him up, and they return to Revanna to find that the Tok'ra base has been annihilated. When they attempt to land their cloaked ship and pick up the rest of SG-1, Zipacna's forces discover them and shoot them down. Their ship won't fly – the only way home is through the Stargate, now heavily-guarded.

Elliot and Lantash volunteer to sacrifice their lives – now lost anyway – to save the others. Elliot takes the Goa'uld toxin from Jackson, knowing that the Jaffa will find him and take him back to the base camp at the Stargate before transporting him up to Zipacna's ship. When he reaches the base camp, he will release the poison – killing himself and all the Jaffa in the area, and allowing SG-1 to escape.

O'Neill hates to leave his man behind, but sees that there is no other choice. Carter bids Elliot and Lantash goodbye, and the team goes into hiding. Elliot places the poison in his pocket, and listens as the footfalls of the approaching Jaffa army loom ever closer.