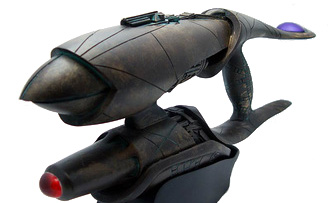 Goa'uld energy weapon capable of making visible and eradicating any object that is out of phase from normal sensory perception. It fires a powerful blast of energy, and is mounted with a search device capable of making invisible enemies visible -- including those utilizing a personal cloaking device as well as species that naturally exist out of phase, such as the Re'tu.

Several versions of this device have been stolen by the Tok'ra.

Show and Tell - Jacob/Selmak arrives with several T.E.R.'s to detect the presence of Re'tu invaders.
Fair Game - The S.G.C. use T.E.R.s to locate Nirrti on the base, who has developed a personal cloaking device.
Rite of Passage - T.E.R.s are pulled from storage to once again detect Nirrti, who has infiltrated the S.G.C.
Death Knell - Jacob and Samantha Carter modify a T.E.R. with a power cell developed from Telchak's device, which is effective in destroying a Kull warrior.