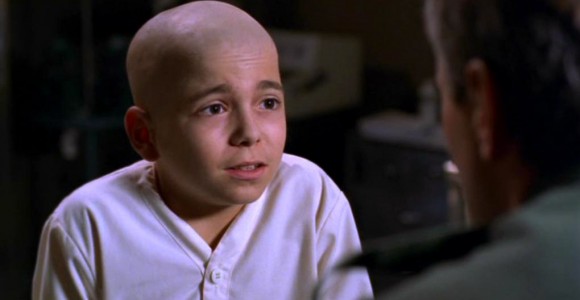 A young boy arrives through the Stargate, and warns of plot by invisible aliens to kill all of the human race in order to rob the Goa'uld of potential hosts.

An unexpected visitor arrives at the S.G.C., and Carter and the technician cannot keep the iris closed. A hooded figure walks through the Stargate, and stands at the edge of the ramp with a squadron of officers pointing guns at him. He removes his hood – and is just a young boy.

Dr. Janet Fraiser examines the boy, and can find no hidden bomb, deadly chemicals or other hazardous substances. The boy claims to be from the planet Retalia, where a race called the Reetou are planning an attack on Earth. The boy – who calls himself Charlie, after Colonel Jack O'Neill's deceased son – has been sent to warn them.

The Goa'uld attacked the Reetou and wiped most of them out, because they considered the aliens to be a potential threat. In response, a rebel group of Reetou are on a mission to wipe out all possible hosts for the Goa'uld – including humans. They believe the Goa'uld are too powerful to attack directly, so they intend to weaken them through a war of attrition.

Jack finds an instant bond with the young boy, who is sick and near death. The Reetou are not humanoid, and created Charlie as best as they could. Several of his major organs are about to fail, and he will die.

Charlie tells them that his "mother" – a Reetou sent by the central authority, and not affiliated with the rebels – has been on Earth for several weeks, observing them. She watched as General Hammond and other leaders manipulated the Salish Indians ("Spirits"), and decided that O'Neill was the only honorable one among their leaders. She has instructed Charlie to speak only with him.

While it seems for a time that Charlie is imagining his invisible friend, "Mother" soon makes it clear that she is very real. A blast fires out, destroying a computer monitor. Indeed, all Reetou exist 180 degrees out of phase with humans. They are completely invisible and silent, until they fire their weapon.

Jacob Carter and another Tok'ra arrive, and are alarmed at the news that a Reetou is in the S.G.C. They retrieve special weapons they have designed – a T.E.R., capable of illuminating and terminating a Reetou. Mother provides the address for the planet where the rebels are staging their attack, and SG-1 goes there with the Tok'ra and other soldiers.

Jacob tells them that the Reetou operate in small, 5-man suicide units. They infiltrate, spread out and try to do as much damage as possible. Each one possesses an explosive that is equivalent to a small nuclear device.

On the planet, the group finds not five or 10 Reetou, as they had expected. Instead, a swarm of hundreds of Reetou prepare to attack Earth. The team returns to Earth with the news, and it is quickly discovered that one of the attack units followed them back.

The Tok'ra who accompanied Jacob is shot dead by the Reetou rebel, whom Teal'c then terminates. The teams begin a sweep of the base, sealing off sections as they go to try and corral the four remaining rebels. They are successful in destroying all four, but in the process Jacob is injured, two airmen are killed, and Mother is destroyed by one of the rebels.

She has accomplished her mission, though – Earth has been warned, and saved from the first wave of the invasion. Rather than let him die, SG-1 sends Charlie back with Jacob, so that the Tok'ra may give him a symbiote to heal his body.

But the Reetou will continue to come, Jacob warns. They will not give up.