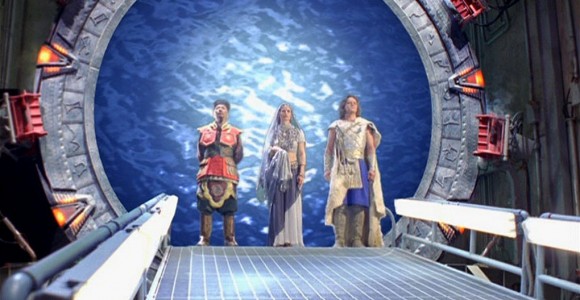 The Asgard aid Earth in negotiating a non-aggression treaty with the Goa'uld System Lords.

U.S. Secretary of Defense Arthur Simms, arrives at the S.G.C. to commend the team, especially in rescuing SG-1 from Hathor ("Into the Fire"). To conclude the ceremony, to the surprise of Samantha Carter, she is promoted to the rank of Major. Colonel Jack O'Neill begins a speech to the assembled group, and is suddenly teleported away.

It is the Asgard, a benevolent and highly advanced race from another galaxy. Thor, the Asgard representative, tells O'Neill that the Goa'uld System Lords have turned their eye to Earth. They believe that in killing Hathor, Earth has again demonstrated itself to be a threat to the Goa'uld. The Asgard are there to mediate a non-aggression treaty between the humans and the System Lords, to include Earth in the Asgard's Protected Planets Treaty with the Goa'uld.

Three powerful and influential System Lords arrive on Earth for the negotiations: Cronus, against whom Teal'c has declared a revenge oath for the murder of his father; Nirrti, who wiped out a planet and an S.G.C. team and tried to destroy Earth's Stargate ("Singularity"); and Yu, who may have been one of China's earliest emperors but whose interests no longer reside in Earth's part of the galaxy.

The negotiations eventually begin, with O'Neill as the Asgard's chosen representative for Earth. He begins by accidentally insulting the Goa'uld, causing a minor incident and a temporary halt to the negotiations.

When they resume, O'Neill learns the heavy price of protection from a System Lord attack on Earth: they will not be allowed to advance technologically to a point where they may become a threat to the Goa'uld; and, they must give up Stargate travel.

After much debate and a phone call to the president, the group agrees to the terms. But before the representatives can be recalled, Cronus and Teal'c are mysteriously attacked, and are taken to the infirmary in critical condition. Teal'c eventually recovers, but Cronus cannot be saved without a sarcophagus – even after Nirrti attempts to use a Goa'uld healing device on him.

Damned if they let the Systems Lords leave and damned if they hold them against their will,General Hammond chooses to break the terms of the negotiation and restrains Yu and Nirrti. The group believes that one of them must have attacked Cronus, but must prove which one. Carter then discovers that Nirrti lied when she said she could not heal Cronus: Carter uses the healing device and saves the System Lord's life.

O'Neill, taking a page out of the Asgard book of strategy, decides to bluff Nirrti. He and Jackson tell Yu that she has been experimenting with phase technology in order to battle the Reetou ("Show and Tell"); she has the ability to become invisible. The gamble pays off, as Yu turns on Nirrti and she tries to escape with her stealth technology. Nirrti is captured, and taken back by Cronus and Yu.

In return, the System Lords agree to include Earth in the Protected Planets Treaty – the planet will not be attacked by the Goa'uld again. In addition, the humans do not have to give up the most important object on the planet: the Stargate.