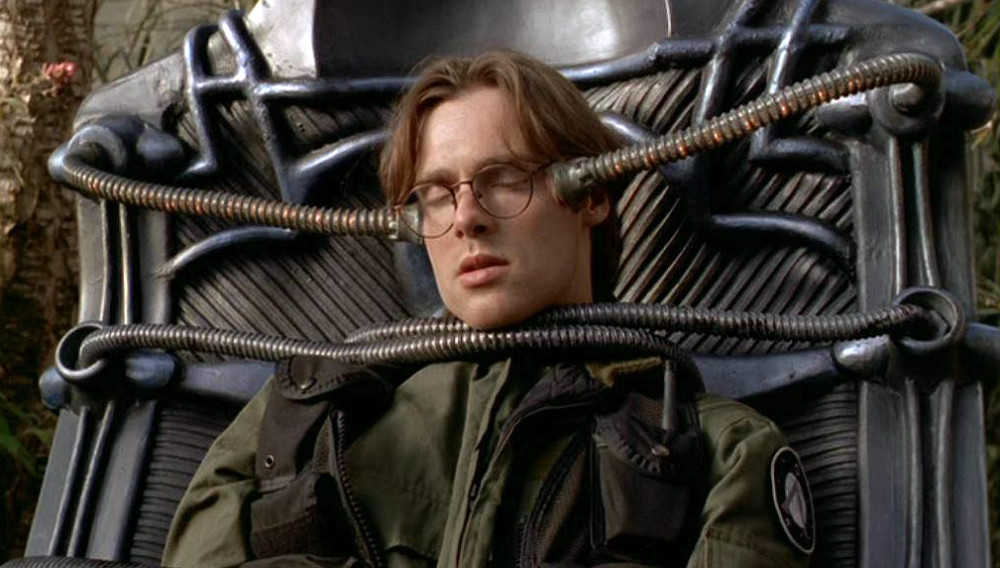 Device designed by the individuals who later became the Residents of P7J-989, allowing stimulation of the synaptic pathways to keep an individual alive. While the mind was occupied, nutrients would be ingested into the body and expelled via various tubes.

If near to a vacant device, the units were capable of reaching out with the cables and restraining them until they had properly sedated the new users into the virtual reality environment. Directly linked into the devices was a virtual atmosphere designed by The Keeper, who made use of a remote to control the virtual experience for the inhabitants.

At least one virtual reality unit was taken back to Earth and put under lock and key in a storage bay deep inside Area 51. Earth used the chair technology to engineer a modified virtual reality unit, under the supervision of Dr. Bill Lee. His team spent several months modifying the unit to train Stargate Command soldiers to fight against various adversaries during a simulated incursion of the Command, including Kull warriors. The programming functions by interfacing memories of the individual into the chair's matrix.

Lee and his team had been working on the chair for two years in the hopes of making it a viable resource for base personnel, but the unit was believed to be scrapped after it would not free Teal'c from its virtual reality environment.

The Gamekeeper - SG-1 releases the Residents of the artificial reality back into the real world to discover the planet has returned to the way it was before their people destroyed it.
Avatar - Teal'c uses the modified virtual reality unit in the hopes of assisting Dr. Lee with perfecting its accuracy at creating a realistic threat.