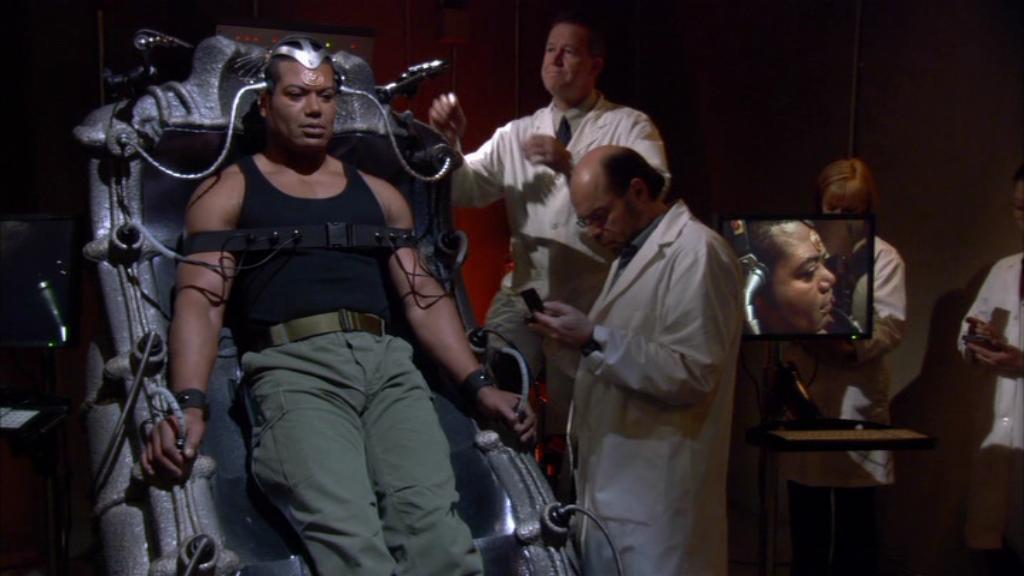 Virtual reality chair modified and enhanced from the original virtual reality units on P7J-989. Dr. Bill Lee and his team of engineers worked for over two years with the devices in the hopes of making it a viable training tool for Stargate personnel.

The unit itself was attached to a sophisticated computer network. Inside the network was software containing a simulation / scenario called the Foxtrot Alpha Six simulation where Kull warriors successfully bypassed the Stargate iris and invaded Stargate Command.

Though the device was designed for troops, it was originally tested by at least four of Dr. Lee's team. Teal'c was the first trained test subject to enter the device, and he discovered that the chair could actually induce a pain response in the form of a minute electric shock, if his conscious mind wished to have the most realistic experience.

Like the virtual reality units of 989, a shut-off command was built into the internal program. That way, only a person within the chair could control it. In the case of the Foxtrot Alpha Six simulation, the shut-off command could be accessed by taking the Cheyenne Mountain elevator shaft to the surface. However, as Teal'c discovered, the shut-off is still flawed.

More than one chair can also be added to the network so multiple players can work together to beat the running program.

Players do not necessarily have to be tied into the chair's "progress recorder" (which records responses and determine the next move for the computer to make). Without this component, the user will not experience a two second processing delay, and will essentially be able to see events before they happen. If one player is connected to the progress recorder and one is not, this strategy can help in beating the program.

Avatar - Teal'c volunteers himself to Dr. Lee's team as they hope to enhance their virtual reality chair to help better train Stargate personnel.