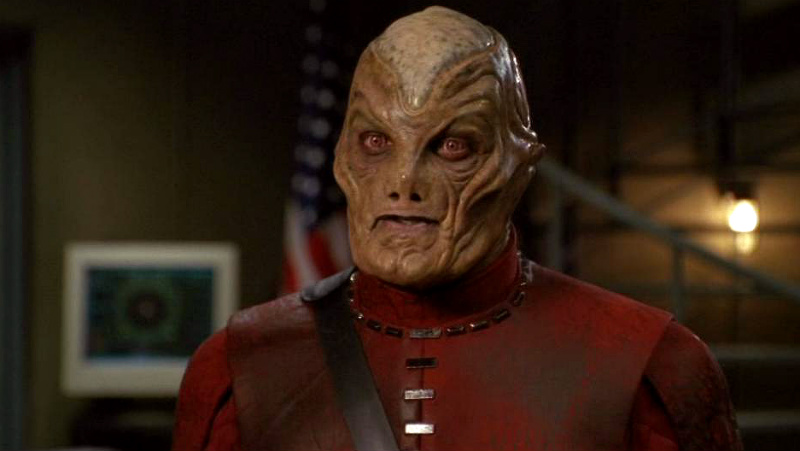 Serrakin from the planet Hebridan, and captain of the prison transport ship Seberus. Warrick has a brother named Eamon. Before being stranded on a barren world for three years, Warrick had been married to a human Hebridian named Athea. His ship the Seberus crashed on an apparently uninhabited planet, and Warrick was overcome by the prisoners he was transporting.

Warrick survived with several of his lieutenants until SG-1 arrived and eventually aided in the recapture of the prisoners, led by Aden Corso.

Upon his return to Hebridan, Warrick found that Athea had remarried and had a family. Intent on starting a new life he joined his brother in preparing for the 59th Loop of Kon Garat -- an annual race whose winner is awarded a lucrative deep space exploration contract with Tech Con Group, Hebridan's leading corporate conglomerate. Warrick enlisted the aid of Samantha Carter, who installed a naquadah generator on the Seberus to power the ship.

They ultimately lost the race -- but the winner, La'el Montrose, invited Warrick to become her co-pilot under her new contract with Tech Con.

Forsaken - Warrick is mistaken for an alien prisoner when it is, in fact, he who is trying to recapture the prisoners who have overrun his ship.
Space Race - Warrick enlists the aid of Major Carter and a naquadah generator to help him try and win the Loop of Kon Garat.