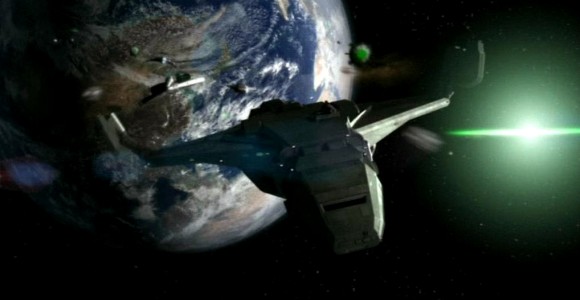 Major Carter joins an alien pilot for a space race, but the rest of the team discovers that on this world there is more at stake than the finish line.

Major Samantha Carter arrives at the S.G.C. and is notified that an alien visitor has arrived: Warrick, captain of the transport vessel Seberus. SG-1 helped him retake his ship from a band of criminals and return to his home planet of Hebridan last year ("Forsaken"). Warrick has an offer to make: in exchange for a chance to study his advanced ion propulsion engine, he would like one of Earth's naquadah generators to power his ship in a race.

Carter – a bit of a thrill seeker in her spare time – is intrigued. With permission from General Hammond she agrees to loan a naquadah generator to help the ship win the race – but only if she can come along as his co-pilot. Warrick agrees, and the two register for the Loop of Kon Garat. It is an annual competition whose winner is awarded a lucrative contract with Tech Con Group, Hebridan's leading corporation.

SG-1 visits Hebridan to prepare for the race. Two species live in an integrated society on this world: the native humans, brought to the planet thousands of years ago by the Goa'uld; and the Serrakin, a humanoid race (of which Warrick is a member) that saved the humans from Goa'uld enslavement generations ago. They live together, work together, and have had several generations to cross-breed.

Carter hooks up the generator to power the Seberus, which should give them a significant advantage over the other competitors. Teal'c stays with her to help, while Colonel Jack O'Neill and Dr. Daniel Jackson go to speak with the local government. They soon negotiate free access to Hebridan's ion propulsion technology, leaving Sam free to enjoy herself in the race. Teal'c becomes acquainted with Eamon, Warrick's quirky engineer brother, who is responsible for the Seberus's systems.

Before the race begins, Warrick and Carter visit a parts shop to negotiate for a vital component. Warrick's credit debt is high, but he convinces the merchant to sell him a refurbished part. He needs it to win the race, Warrick explains, after which he will get the Tech Con contract and be able to repay his debts. Eamon, meanwhile, explains to Teal'c that his transport business is all that Warrick has left. When he returned from being stranded on another planet, Warrick found that his wife had remarried and his family was gone.

Carter and Warrick have a brief tussle with Golon Jarlath, another pilot entering the race. He's a brash weapons specialist. Of the 10 or so competitors, Warrick is concerned primarily with Jarlath, Muirios (an expert human pilot), and La'el Montrose (a female pilot).

The no-rules race begins, and the ships speed into the first of four stages. A group of automated weapons drones begin chasing and firing at the racing vessels, testing their defense capabilities. A few ships don't make it through. At the second stage, the ships fly through the corona of Hebridan's sun, testing their shield strength. It is here that they learn that their ship has been sabotaged; the Seberus is crippled.

Carter and Warrick work feverishly to bypass the sabotaged component, rerouting power from the generator directly into the engines. As they get the ship underway and re-enter the race (in last place), Eamon and Teal'c investigate the sabotage. Eamon traces it to his supervisor at Tech Con Group, a human by the name of Del Tynan.

With Teal'c disguised in a Tech Con employee's uniform, the two enter the office building and break into Tynan's computer. They learn that he has sabotaged all the ships in the race except for Muirios', in order to help the pure-blooded human win the race and the lucrative contract. He is a member of a racist group who believe that the Serrakin have polluted the human race and virtually enslaved them all over again, and are no better than the Goa'uld.

Tynan holds Teal'c and Eamon at gunpoint, and signals Warrick on the Seberus. The ship is quickly gaining on the leaders. He tells Warrick and Carter to drop out of the race if they want to see Eamon and Teal'c again. They reluctantly comply. But when O'Neill and Jackson come looking for their friends, they are shown to Tynan's office by the head of Tech Con Group – who is half Serrakin himself. Tynan is apprehended, and the Seberus enters the race once more.

As the ship pulls into third place (behind Muirios and Montrose), they receive an automated distress signal from Jarlath. He has been unable to fix the sabotage done to his own ship, and reluctantly comes aboard the Seberus. As the finish line looms near, they know that they will never catch the cheating Muirios. But with Jarlath's expertise, they can disable Muirios' ship. As the two ships pass at a curve in the race course, Jarlath fires a pulse that disables Muirios' power systems. La'el Montrose takes the prize.

SG-1 returns home, happy to learn that Montrose has asked Warrick to be her co-pilot in working with Tech Con. Sam tells Daniel that in next year's race ... she's going to kick some butt.