Beware of SPOILERS for Stargate SG-1‘s eighth season — including the episodes “Endgame,” “Gemini,” and “Reckoning” — in this interview!

For nearly eight years now, actor Christopher Judge has portrayed the stoic and immovable Jaffa warrior, Teal’c — despite the fact that his own cheery personality is about as far away from his character as it can get. We caught up with him at The Official Stargate SG-1 Convention Tour in Chicago. In this exclusive interview with GateWorld, Chris talks about some of his favorite Teal’c episodes in Season Eight — including what’s still to come!

Chris also talks about writing for the show; his latest effort is this week’s “Sacrifices,” which sees the return of Jolene Blalock (“T’Pol” on Star Trek: Enterprise) as the Jaffa Ishta. (Even co-star Amanda Tapping gets roped in briefly when she ventures too close to the interview!)

Our thanks to Chris (who followed our chat with a very entertaining stage appearance before hundreds of Stargate fans), and to convention host Creation Entertainment.

GateWorld: Tell us about “Sacrifices,” from the initial idea through the shooting of the episode.

Christopher Judge: Well, it was — because “Birthright” went over so well, we started talking immediately about doing a sequel to it, a follow-up episode to it. And so I had this idea for kind of what I thought would be a more comical episode, involving a wedding. And in fact the original title of the episode was “My Big Fat Jaffa Wedding.”

But as I started writing it, it didn’t turn out as funny as I thought it was going to be, because there were serious issues that needed to be addressed as far as their freedom, their goal, the whole Jaffa movement — and as far as the whole Jaffa movement of freedom, and how the Hak’tyl don’t necessarily see eye to eye with the bigger movement. And they’re going to go about their liberation differently. 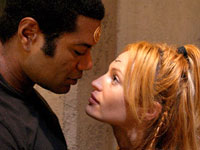 Teal’c is reunited with Ishta (Jolene Blalock) on the eve of his son’s wedding. From “Sacrifices”

So I remember giving the draft to Coop [Robert Cooper, executive producer], and he said, “Well, how is it?” And I said, “I don’t know. It’s not funny.” And he said, “You know, a lot of times these start out in our minds as what’s going to be kind of a lighter episode. But when there are issues that you have to deal with because of an on-going storyline, a lot of times it doesn’t end up the way you envisioned it because you have to address certain issues.”

So I’m happy with the way it turned out, but it’s so different from how I envisioned it. I envisioned it just as the power of laughter … and it’s not! [Laughter]

GW: Does the episode retain some of the humor that you originally envisioned?

CJ: Oh, certainly. And there’s some great beats that Tony Amendola [Bra’tac] brought to the script that played really well. And, you know, Jolene is great — she really is. And my brother appears in it, in one of the co-starring roles. So yeah, it was a really fun week.

GW: But she wasn’t his wife at the time!

CJ: That’s true. Does that count?

GW: I’m not sure how official any of these rankings are …

GW: Was this episode any different from “Birthright,” knowing this time that you were writing for Jolene Blalock?

CJ: Well, I actually wrote “Birthright” for her. They asked me who I saw, and I said, “Well, I kind of wrote it with Jolene Blalock in mind.” So it was either — if we hadn’t gotten Jolene, the only two people I really saw doing the role at all was either Jolene or Victoria Pratt. And we were fortunate enough to get Jolene.

GW: Obviously you have a vested interest in Teal’c and his arc, but as a writer what are some of the other stories you might like to tell if you were to write something with Jack, Daniel, or Sam at the center? 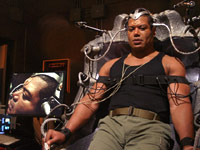 Teal’c is trapped in a deadly virtual reality simulation. From “Avatar”

CJ: If I were to write for Daniel, I think it would — I always found that the stories that involved he and Sha’re and the search for her to be quite compelling, especially after she had the child and everything. I always found those to be really compelling. But, you know, with Shanks you can pretty much write anything because the cat’s such a great actor.

I don’t know if I could write for Carter. Her character is maybe a little too complex for me, and I’d have to research all that techno-babble crap! [Laughter] You know, I don’t want to write for her because — it’s like I’ve got to look up too much stuff, you know? [Laughter] I’ve got to put those eight-syllable words together. What fun is that? [Laughter]

And I think the definitive Rick episode has already been written. I forgot what the title is — it’s like the third or fourth episode this year, where it’s just almost like a day of his as General [“Zero Hour”]. And oh, my God … I was on set for some of that, and this cat is funny. He so revels in the fish-out-of-water stuff. And just the premise of O’Neill as General — as a writer you have so many places to go with that. And you know Rick is just going to play the hell out of all those weird, odd moments of “What am I doing here?” And he’s so irreverent. But Rick as a person is so quick-witted that he just puts spins on these situations that are just wonderful.

And if I was ever to write — I mean, I can’t, because that’s the episode I would have wanted to write. And I think just the whole execution of it was just fantastic.

GW: We’ve seen a lot of Teal’c in the first half of Season Eight. “Avatar” was great.

GW: And “Affinity” — the opening teaser of that episode, where Teal’c stops the gang from beating up the poor kid, was one of the funniest things I’ve ever seen on Stargate.

GW: The costuming was so good.

CJ: Oh, we had such a ball. Christine and I — the wardrober — she’s wonderful. We had so many great years with Christina McQuarrie. So when you have someone new, you kind of always — you’re always kind of hesitant. She just took the time to really get to know us, and learn our different likes and dislikes, and things like that. 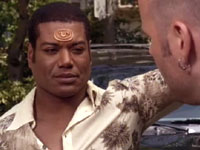 After moving into an apartment on Earth, Teal’c stops a fight after a car accident. From “Affinity”

So we actually went out shopping. We had just a great day. Because, in my own life, I like to wear loud, colorful clothing. And Christine McQuarrie actually set it up so that Teal’c has this kind of bizarre love of very odd clothing. And I as a person revel in that. And Christine came on and just got it right away. And she had already pulled some stuff, and I literally just hugged her and said, “Wow! You get it! You get it.” We had so much fun going out and shopping for that episode.

It’s funny — I got the episodes “Affinity,” “Avatar,” and then I knew “Sacrifices” was coming up. And I went up to the office and I was talking to all the writers and I was like, “I don’t know who I made happy, but thank you for all these episodes!” I don’t know what I did to deserve this! It was tiring. But yeah, it was a great run of episodes.

And the one before “Sacrifices” is … I’m so terrible with names.

GW: The one that just aired this week was “Covenant.”

GW: After “Sacrifices” is “Endgame.”

CJ: “Endgame!” “Endgame.” Yeah, that also was a great episode. I go to this planet for a meeting and see that this whole planet of free Jaffa have been slaughtered. So we think it’s the Tok’ra who’s doing it. But it’s this whole great arc, and I just really enjoyed it. Tiring, but I really enjoyed it.

GW: So what’s coming up in the second half of the season for Teal’c? What have you been working on lately?

CJ: No, “Sacrifices” was first half.

“Gemini” was great. I was fortunate enough to see Colonel Carter and RepliCarter kind of dueling it out. And an episode I wasn’t in, “Prometheus Unbound,” is just fantastic. It’s hilarious. It’s one of the more fun — that and “Zero Hour” are probably the two most fun episodes of the year. And Claudia Black is in that one, and her and Shanks just have such a great rapport together. I saw a cut of it, and it came out fantastic, it really did. 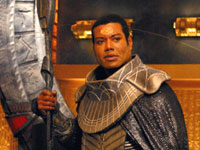 Teal’c discovers that a group of free Jaffa have been slaughtered. From “Endgame”

So, yeah, there definitely won’t be a let-down as far as the second half of the season goes. And we, we’re shooting — hey, what’s the name of the episode we’re shooting right now?

CJ: Yeah, “Reckoning” one and two. “It’s not about revenge, it’s about the reckoning!” I’ve been saying that all week, because one of my favorite movies is “Tombstone.” But yeah, that’s a very — and we have Isaac Hayes. It’s coming close to the climax of the battle for freedom, and this deals with two reckonings. It deals with getting together all the Jaffa, and then trying to take the holy city of Ta’kara. So it’s pretty much the climax of this eight-year arc of their quest for freedom. And so Tony’s back, and then Isaac is in it, and my brother’s in it.

It was such an honor to work with Isaac Hayes. He’s one of the priests that has become a rebel. No one on the planet says “Goa’uld” like Isaac Hayes! [Laughter] But yeah, just a wonderful man.

GW: So, last question: What are our chances of seeing Teal’c on Atlantis?

CJ: You know, I don’t really know. Everything is so up in the air right now. You know, of course I would welcome it. But they’ve got a great thing going on over there. But you know, we’ll see. We don’t even know if we can do it for us again.

So yeah, I’m as looking forward to what transpires next here as anyone, because it is very much up in the air. But you know, the fans will have a lot of say about what goes on and what happens.

CJ: Hey, I certainly hope so! Thanks very much.