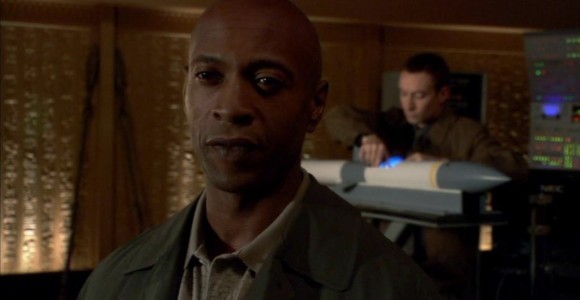 The Stargate is stolen, leading SG-1 to discover that the Trust has taken control of an advanced ship in orbit. Teal'c investigates a series of wide-spread Jaffa deaths.

It's three in the morning. While two sergeants monitor gate activity at the S.G.C., the Stargate is stolen by what looks to be an Asgard beam ...

The next morning, Daniel Jackson questions the officers, but they reveal no information of value. Samantha Carter plays back the video feed where it is unanimously decided that the technology used to take the gate was Asgard. In a foul mood, Colonel Jack O'Neill calls the President and informs him of the bad news.

Teal'c, receiving a "Do Not Proceed" response to his I.D.C., travels to the Alpha Site to consult with the officers there. They reveal that Earth may be compromised. Teal'c plans to return to P4S-161 to get a cargo ship to take back to Earth.

For two days prior to the loss of the gate a small signal was detected, but no one thought anything of it until the Stargate disappeared. Reviewing video logs, it becomes clear that Dr. Kevin Hartkans, who has been with the base for seven months, placed something on the Stargate at the exact same time the anomaly was detected. Carter believes it was a "tag" so that Asgard transporters could detect the gate and beam it away. She requests N.S.A. satellite time to detect the signal.

Teal'c arrives on P4S-161 and discovers the entire population of rogue Jaffa dead, save for M'zel, who only recently arrived. He takes Teal'c to the lair of the main camp, revealing hundreds of fallen warriors.

Sam, Daniel and a small battalion of troops probe the location of the Trust's signal, but find an empty warehouse, save for V.X. rockets and several cases of what appears to be nerve gas. When an elusive member of the Trust emerges and shoots at the team, he hits several canisters before Carter zats him down. Believing it to be too late, they await their death, but it never comes.

Back at the S.G.C., Carter believes the Trust intends to launch a full-scale chemical attack against the Goa'uld, using rockets to convey symbiote poison, with no regard for the lives of the Jaffa. The man they caught carried only an Area 51 badge.

Carter and Daniel go to the Nevada base and meet with Dr. Bricksdale, requesting to see Osiris' hand device, capable of activating Asgard technology. They scan the device and it proves to be the genuine article, but is useless for getting aboard her cloaked ship.

Meanwhile, M'zel has traveled back with Teal'c to the Alpha Site. He receives word that three more planets have been attacked. Millions are now dead. M'zel agrees to travel with Teal'c to P3S-114 (where a Tok'ra is concealed as a Goa'uld under Baal's authority) to inquire if her people are responsible for the demise of the countless Jaffa.

Dr. Bricksdale meets with Trust agent Hoskins, hoping to neutralize their partnership, but Hoskins soon realizes that Bricksdale has been followed. After a brief skirmish he initiates his locator beacon, but Carter zats him before he can activate it. Instead, she takes it and uses it to get up to Osiris's Al'kesh, where she is rendered unconscious by more of the Trust.

Teal'c and M'zel allow themselves to be captured by Zarin's Jaffa. When Zarin is informed, she immediately orders that they be brought to her. She is furious that they have risked blowing her cover, and tells them that she is obligated to torture them until Baal can arrive to watch them be executed.

Meanwhile, Jackson interrogates Dr. Bricksdale, telling him that they can come to an agreement to keep the two million the Trust paid him for cooperation if he helps the S.G.C. regain Carter and Osiris's ship. Bricksdale explains that he did manage to get on board Osiris's vessel, but the hand device never left Area 51 (at least while it was on Earth). He used locator beacons to get the Trust aboard. Daniel pieces the puzzles together: the code Daniel translated for them was the very same one that gave the Trust access to the Al'kesh. Bricksdale promises he can make the wrist device work once more.

Carter awakens to find herself surrounded by the Trust. Soon she confirms they are launching a chemical war against the Goa'uld. Their next target is P3S-114. As Zarin is interrogating Teal'c and M'zel, the rocket impacts, and all symbiotes, including Zarin and M'zel's, quickly die, taking them along with it. Teal'c is the only one on the planet left standing.

Daniel uses Osiris's hand device to sneak aboard the Al'kesh and disable the cloak. Prometheus detects the ship, but he is soon captured. Aboard Prometheus, Colonel Pendergast requests that they take the vessel out before it has time to escape, but O'Neill does not give the order.

Teal'c contacts the Stargate aboard the Al'kesh once again, and Daniel and Sam use that moment to take down two members of the Trust. Teal'c comes through and kills Hoskins with a staff blast. Before the Al'kesh exits into hyperspace, Carter uses a locator beacon to beam SG-1 and the Stargate into Prometheus's cargo hold.

S.G.C. installs jamming beacons around the gate so that it can no longer be taken. Unfortunately, the Trust have a hyperdrive-capable Al'kesh and enough poison to wipe out half a dozen more planets. It might have been better if O'Neill destroyed the vessel when he had the chance.