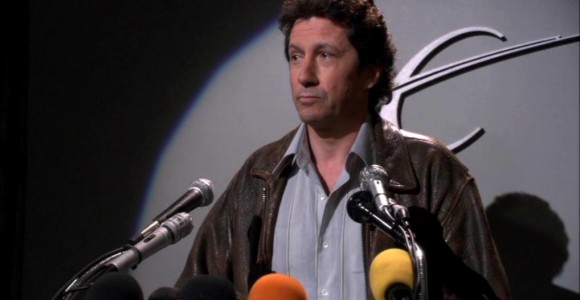 A businessman threatens to expose the secrets of alien life to the world, forcing Stargate Command to bring him into the loop.

Alec Colson, President and C.E.O. of Colson Industries, calls a press conference to dispute the meteor shower incident that cost the lives of thousands five months ago. "We are being lied to, and the truth is being covered up," he tells a room of reporters. He then gives the world governments who are concealing the truth 24 hours to reveal the real story to the public – or he will do it for them.

General O'Neill orders Colonel Carter and Dr. Jackson to Colson Industries to meet Alec in person and attempt to dissuade him from going public with whatever information he has. While there Colson shows them images his satellites have taken, including Anubis's fleet and the battle over Antarctica. He assures them that he has far more information, and has no intention of backing out.

Twenty-four hours to the minute, Colson reappears in his press room. The governments have only responded with silence, forcing him to go to the next level. As the crowd turns around to the back door of the room, an Asgard enters. Blinded by the camera flashes, he covers his eyes. O'Neill and SG-1, watching the live broadcast, wonder what their next move will be.

Stargate Command gets a message back from Thor. He knows no Asgard currently operating on, or in orbit of, Earth, and surely no Asgard would allow himself to be used in such a manner.

Back at Colson industries, Alec and his team monitor as the media crazily lines up for interviews with the creature (which has the capability of speaking, but not the brainpower). It was a genetic experiment, and the DNA was acquired from the department of defense. Essentially, it is an empty shell until an Asgard consciousness is transferred inside.

The Pentagon orders Stargate Command to deal with the problem, and immediately Thor is summoned. He uses his beaming technology to transport the clone and all of Colson's research aboard his ship, away from their hands. Shortly afterward Carter appears on Julia Donovan's program, Inside Access, and explains how Colson's alien was a holographic trick. Thor appears as a hologram and plays along to solidify her position to the viewers.

Shortly afterward Colson's airplane is forced into an emergency landing after takeoff. The plane had depressurized in mid air. Colson calls Sam. He is safe, but he questions if Washington had something to do with the incident. She says she would have never went on-air to discredit him if she knew he was going to die.

Before O'Neill and Thor meet with the President, Carter proposes they let Colson in on everything; show him why it's so important not to go public. Meanwhile, Colson is not stopped. He intends to go forward with the images and pieces of the downed Goa'uld craft from Antarctica. Brian Vogler, his closest assistant, urges him not to go forward. "They tried to kill us," he says. In the midst of their argument Alec is swept away to the S.G.C. by Thor. He is soon introduced to the "real" Asgard and the Stargate.

Carter provides him with a uniform and takes him to the Alpha Site, where he meets some of the officers and is introduced to the F-302, a ship his company helped build with multi-engine controls. Sam takes him up for a little fun, and in mid-flight he gets a chance to take the stick, but when he gets control he plummets the craft back to the surface in a crash-dive. Carter switches back over in the nick of time and pulls up, gliding the 302 back to base.

After they land, Colson states that the lecture and the joyride he got in the air will not dissuade him from telling people what they have a right to know. Colson clearly believes knowledge of the Stargate and aliens would unite humanity, but Carter proves that global disaster has happened on other planets who received the exact same knowledge ("Icon").

When Carter and Colson return to Earth Daniel reports a story broke out showing that Colson's businesses are now being investigated for financial fraud. Back at Colson Industries, Brian admits to doctoring the financial statements to pull the company down. The Trust – powerful people once connected to the defunct rogue N.I.D. – got to him six months ago. Somehow, they knew the evidence Alec had. Vogler's word alone will not be enough to bail the company out of debt, or them out of jail.

After Brian's family is put into protective custody. O'Neill receives a phone call saying that Vogler hanged himself in his bathroom.

Carter visits Colson, who is obviously distraught, toying with a pistol. He feels directly responsible for his best friend's death. Sam says congress is ready to provide relief to the company's work force so that they will be able to survive, and informs him that her superiors have given her authorization to make a proposal. Since there is nowhere on Earth that he will be able to hide, they have offered him life on another world.