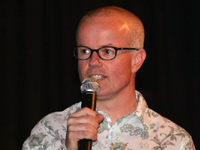 Stargate SG-1 co-star Gary Jones laughingly described the evolution of his character’s name when he spoke to fans on stage Saturday at Creation Entertainment’s Official Stargate SG-1 / Stargate Atlantis Convention in Vancouver, British Columbia.For years the character, who first appeared back in the show’s first season, was listed in episode scripts as simply “Technician.” He occasionally could be seen sporting the name “Davis” on his uniform.Jones said that the name “Harriman” emerged from co-star Don S. Davis’s (“George Hammond”) demeanor and Southern accent. “That’s how I got my name,” he joked. “Don Davis hammered on set couldn’t prounounce ‘airman.'” “Sergeant Harriman Davis” was born.In Season Four’s “2010,” Richard Dean Anderson (“Jack O’Neill”) improvised the first name “Walter.” “You just called him ‘Walter,’ crew members on the set tried to tell Anderson. “His name’s not Walter.”

“Well, it is now!” Anderson said.”Davis” was soon dropped, with “Walter Harriman” finally entering the show’s canon with on-screen references in Season Eight.The crowd laughed even harder when Jones demonstrated his impression of Star Trek Captain James T. Kirk — which he said SG-1 director Peter DeLuise often insists he do on set. “That’s a great take, Gary. Now do it as Kirk!” The director’s shinanigans have caused more than one embarrassing moment for the actor, including the first time he had to deliver his lines as Kirk in front of an uninformed Beau Bridges.Jones also laughs at his character’s frequent promotions, being made Chief Master Sergeant for Season Nine. “‘Hey, you got a promotion!'” he said to the convention crowd. “For what? Typing under fire? Filing under duress?”Gary Jones also appeared at the Friday night cabaret event to entertain Stargate fans. He will appear at the Chicago convention in August.Photos by kiwigater. Special thanks to blingaway.