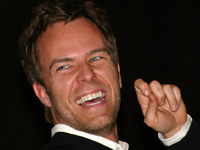 Fan-favorite Stargate SG-1 guest stars helped to wrap up The Official Stargate SG-1 / Stargate Atlantis Convention in Vancouver, B.C. on Sunday, with Cliff Simon (“Baal”) and JR Bourne (“Martouf”) appearing together on stage — despite the fact that their characters never met.Simon offered a few hints at his return to the series in Season Ten, including the episode he is filming now, “Insiders”. He said that he brings his “bad” side to the sinister character he portrays on screen, and acts as he would if he were to be bad in real life.

JR talked about his character’s death in Season Four’s “Divide and Conquer,” and said that he wanted to explore Martouf’s relationship with his Tok’ra symbiote Lantash a bit more. One aspect of the dual-personality character that appealed to him is that “Lantash was aggressive, had more of the fighter instinct than Martouf did,” JR said.

When asked about Christopher Judge’s promised “Men of Sci-Fi Calendar” for 2008, JR confirmed that he will be in it. Cliff had not heard about the project yet, but fans expressed a great hope that the former Mr. South Africa model would pose.

One fan then stepped to the microphone and reminded Cliff of a German convention he did last year, at which he took off his shirt on stage! She offered $400 cash to the Make-A-Wish Foundation if he would give a repeat performance, which the actor was happy to oblige. Fan photographers, of course, went wild.

JR told fans that he didn’t know his character was so loved by viewers until he saw the fan response to Martouf’s death. He loved being able to come back with an alternate universe version of his character in last season’s “Ripple Effect,” and said, “I would come back in a heartbeat. It’s just scheduling for me.”

The show’s writers hoped to bring back Martouf in Season Five’s “Summit” and “Last Stand,” but rewrote the story to give the Lantash symbiote to Lt. Elliot (Courtenay J. Stevens) when JR wasn’t available for the shooting days.

The two were later interrupted on stage by the surprise appearance of fellow Stargate alum Colin Cunningham! Colin plays Major Paul Davis on the series, last seen in Season Eight’s “Zero Hour.” He said hello to the fans and complimented Cliff and JR on the job they were doing before exiting.

Cliff also offered some news on the development of his character in Season Ten, to which JR replied, “Do you know what’s happening with my character?”

When another fan asked if the actors would go through the Stargate if it was real, JR said he absolutely would — then joked that he would only if he knew it was safe on the other end. “You’re such a wimp,” Cliff joked. “That’s why you’re not a Goa’uld.”

Finally, Cliff revealed to fans that he enjoyed working with former SG-1 star Richard Dean Anderson — but that the actor wasn’t there (or even in the country) for most of their scenes in Season Six’s torture episode, “Abyss.”

Cliff and JR also signed autographs and took pictures with fans at the event, which wrapped up on Sunday evening with actor Beau Bridges (“Hank Landry”), fan-made music videos, and a “Stump the Experts” trivia panel with GateWorld’s staff being roundly trounced on stage.

Watch GateWorld for more with Cliff and JR in the weeks to come!