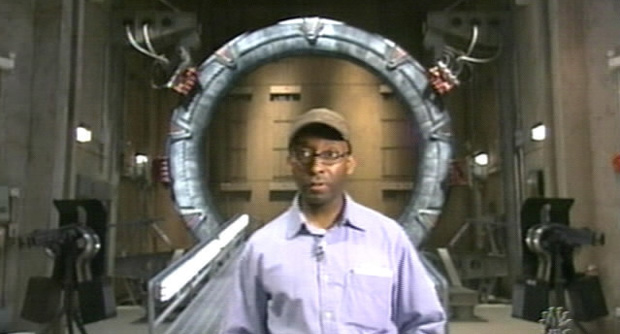 The May 5 episode of Late Night with Conan O’Brien included a special look behind the scenes of the two-hundredth episode of Stargate SG-1, as Late Night graphic artist Pierre Bernard visited the show’s Vancouver set. Here’s a look at the special feature — beware of some spoilers for “200!”

The feature ended with a scene from the episode, in which Colonel Cameron Mitchell (Ben Browder) is fighting off zombies in the gate room. Mitchell orders Walter Harriman (Gary Jones) to dial the Stargate, in order to send through an Ancient healing device — a piece of technology capable of reanimating dead tissue, which SG-1 first discovered in the seventh season two-parter “Evolution.”

Mitchell hopes that getting rid of the device will stop the zombies attacking the base.

Bernard plays one of the zombies in the episode, probably the same character of O’Brien that he played in Season Eight’s “Zero Hour.”