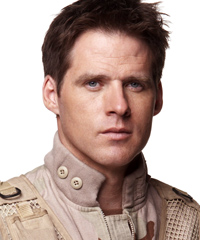 Lt. Colonel Cameron Mitchell is the commanding officer of SG-1, following the promotion of Jack O'Neill to Major General and the disbanding of the original SG-1 team. Mitchell is a daring fighter pilot, who led an F-302 squadron in the battle with Anubis's forces over Antarctica.

Mitchell and his co-pilot, Adam Banks, were shot down during the battle, in which they destroyed an enemy Al'kesh. Banks was killed, but Mitchell survived, though seriously injured. He was awarded the Congressional Medal of Honor, and gradually recovered. O'Neill promised him anything he wanted if he recovered; Mitchell chose SG-1 because he wanted to be on the front-lines with the best.

Mitchell, shot down in Antarctica, hears the victory of SG-1 over his intercom. From "Avalon, Part 1"

Upon his arrival at Stargate Command, Mitchell learned from new base commander General Hank Landry that Samantha Carter and Daniel Jackson had taken new assignments, while Teal'c had left Earth. Cameron was to lead the new SG-1 ... but the Colonel had difficulty finding anyone worthy of joining his team. He appealed to the former members of SG-1 to return, but was initially turned down. However, events took a hand, and he finally found himself in charge of the team he really wanted.

Mitchell is a highly competent and enthusiastic leader, dedicated to military service and excited to be a part of the team he has until now only watched from the outside.

Avalon, Part 1 - Cameron Mitchell is made the new commander of SG-1, but cannot find anyone he wants on his team ... except Carter, Jackson, and Teal'c, who have moved on to new things.
Babylon - Cameron is shot and nursed back to health by the Sodan, an elite tribe of Jaffa warriors -- only to be forced into a ritual fight to the death.
Collateral Damage - Mitchell stands falsely accused of murder after alien technology is used to graft the memory of the gruesome event into his mind.
Stronghold - Mitchell spends time at the side of Bryce Ferguson during his final hours, treating him to the Galaran memory technology to share the wonders he has missed.
Camelot - When SG-1 visits a medieval village searching for Merlin's weapon, Cam goes toe-to-toe in a sword fight with the holographic Black Knight.
Uninvited - Cam spends an awkward vacation in the mountains with General Landry.
Company of Thieves - Mitchell goes undercover in the Lucian Alliance to try and save his team.
Bounty - Cam returns home to Kansas for his high school reunion, with Vala in tow as his date.
Unending - Trapped on the Odyssey in a time-dilation bubble, Cam grows increasingly frustrated with his helplessness as his life slips away.
Stargate: The Ark of Truth - Mitchell and SG-1 travel to the distant Ori home galaxy to confront the enemy directly, leaving the Colonel to fight a Replicator-enhanced creature on board the Odyssey.
Stargate: Continuum - After it becomes clear that Baal has changed the timeline Mitchell, Carter, and Jackson sacrifice their lives to set things right.