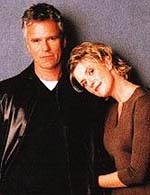 For one enchanted weekend, Stargate SG-1 fans from around the world can share the magic of Avalon with their two favorite Stargate stars. Richard Dean Anderson (“Jack O’Neill”) will appear with Amanda Tapping (“Samantha Carter”) at the Avalon 2006 convention in Somerset, England to raise money for the actors’ favorite charities.

It is the first Stargate-specific fan convention for Anderson, who led SG-1 as the series lead and executive producer for eight seasons. Anderson has confirmed that he will appear at only this one convention for 2006.

Anderson confirmed his attendance with a note on his Web site RDAnderson.com, stating:

“The Avalon 2006 Convention is the only event of its kind I will be attending in the near (or possibly distant) future. I have only spoken with Thomasina Gibson and Paul Brown [from Legends Memorabila] regarding any appearance anywhere this year. My intention is to donate all proceeds to The Waterkeeper Alliance, and the Sea Shepherd Conservation Society. My thanks to everyone who has helped me help them.

Bless the Rivers and the Seas!”

On Tapping’s Web site, she confirms all her proceeds will go to charity, as well.

“Just wanted to officially say that, Yes! I am thrilled to be participating in the Avalon Event with Richard Dean Anderson. We are excited to meet more fans and to share our stories. I too will be donating proceeds to the Waterkeeper Alliance and some of my smaller local charities.”

Attendees will join Anderson and Tapping for morning coffee or afternoon tea in the 800-year-old Bishop’s Palace at Wells in England. There, fans will have individual photo sessions. In addition, each participant will receive a specially commissioned Chalice made exclusively for this event. A total of just 580 tickets are available.

The Gabit event is scheduled for November 24 to 26, 2006 on the Ancient Isle of Avalon, with Glastonbury Tor (featured in the Season Nine episodes “Avalon,” parts one and two) towering in the distance. Tickets are £230 (£195 plus VAT) and are non-refundable.

November 17 to 19, 2006, a second event is dedicated just to Tapping for her “AT2” weekend with her fans. Registration is £149 plus VAT. Proceeds will go to Tapping’s selected charities.

For more information and to purchase tickets go to GabitEvents.co.uk!

(Thanks to Thomasina Gibson for the tip!)