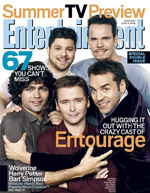 “I really think of this show as a comedy,” Wright told the magazine. In fact, the upcoming two-hundredth episode includes scenes with “SG-1 members portrayed by marionette puppets as they flash back to alternate realities,” according to the article.

“There’s been a number of Wizard of Oz references over the years,” Cooper said. “We have a sequence that pays tribute.”

The article represents the first recognition of GateWorld, now more than six years old, in a major publication. “GateWorld.net is to Stargate followers what the ancient circular rings are to the premise of the show: a portal,” the article reads, recounting the origins of the site and calling GateWorld “the most respected Stargate gathering spot on the Web.”

Site founder Darren Sumner was interviewed for and quoted in the article on Stargate’s fans and overall popularity … and is now writing this article reporting on it. Circle of life.

Look for the June 9 issue of Entertainment Weekly (#880/881) on news stands now! Stargate SG-1 premieres its tenth season on SCI FI at 9 p.m. Eastern/Pacific on July 14.