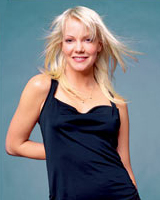 Actress Laura Harris has been cast in an upcoming episode of Stargate Atlantis, series co-star David Hewlett recently revealed on his blog. Harris will appear in “The Game” — very likely as Nola, the leader of the nation of “Geldar.”

Born in Vancouver, B.C., 29-year-old Harris co-starred as Daisy Adair in MGM’s offbeat, dark comedy Dead Like Me. She has also appeared on 24, The Outer Limits, and The X-Files, and recently guest starred on The Dead Zone as the daughter of Don S. Davis’s (“George Hammond”) character.

In “The Game,” Colonel Sheppard and Dr. McKay discover that an Ancient SIMS-like game they have been playing is actually controlling the fates of two villages on a real planet in the Pegasus Galaxy. There they find Nola, a beautiful young woman who McKay has fashioned to resemble Samantha Carter.

“The Game” will air this spring on SCI FI Channel in the U.S. Learn more in GateWorld’s Season Three episode guide!