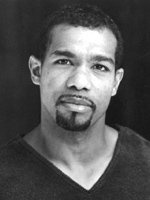 Actor Michael Beach has been cast as Colonel Abe Ellis in the upcoming season finale of Stargate Atlantis, GateWorld has learned. The role may be recurring, though nothing has yet been confirmed for Season Four, series co-producer Martin Gero told GateWorld.

Perhaps best known as Monte “Doc” Parker in the NBC drama Third Watch, 43-year-old Beach has also appeared in such series as Without a Trace, Law & Order: Special Victims Unit, E.R., and N.Y.P.D. Blue. He was born in Roxbury, Massachusetts, and graduated from the distinguished Julliard School.

Abe Ellis is the commander of Earth’s newest deep space vessel, the Apollo. In “First Strike,” Ellis and the ship arrive from Earth with a plan to attack the Replicators on the Asuran homeworld as a preemptive strike.

With the arrival of the Apollo and its potentially recurring commander, how does this bode for the Daedalus and its commander, Colonel Steven Caldwell (Mitch Pileggi)? “Mitch is very busy on his new ABC show [Day Break], but the Caldwell character is still very much a part of the Atlantis universe,” Gero told GateWorld. “We hope that he’ll be able to join us for Season Four.”

“First Strike” is expected to premiere in June on SCI FI Channel in the U.S. Learn more about the episode in GateWorld’s episode guide.