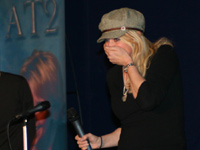 “What I’ll take away with me that I was able, for ten years, to work on a show that was really, genuinely, a joyful place for people to come,” Amanda Tapping told Gateworld at a recent convention. “Our show had a very cool vibe. I don’t know what it was. There was something magical about Stargate and the combination of people.”

The slightly melancholy but hopeful mood set the tone for the weekend during the “Amanda Tapping: A Weekend with her Fans – The Return” convention, held in the Renaissance Hotel in London, England.

During her sessions on stage, Tapping spoke about the good times — including Chris Judge surprising her during the taping of a very emotional and sad scene by jumping out wearing a pair of break away pants … which he did break away to reveal a sight that still sends a shudder down her spine. She also talked about hope for her future, including an upcoming project that is still seeking funding, and her hopes to produce and direct projects in the future.

She sees her time as Sam Carter as a gift. “I’ve had a steady gig, which has allowed me to have a family, to stay in the same city, where I was kind of nomadic before,” she said. “I don’t think if I hadn’t played the same character in the series for so long I would have had that luxury.”

Stargate SG-1 and Atlantis spoilers were in short supply, however Tapping did reveal that she will be doing an undetermined number of Atlantis episodes for the show’s fourth season. “I’m contractually obligated to the franchise for a year. I knew that when I signed at the beginning of Season Ten, that it was a possibility that if SG-1 went down that I might be doing some Atlantis,” she said.

“I don’t know how the fans will feel about that, and I understand the trepidation of crossing over a major character from one show to another. Don’t slam the door on it just yet! We’ll see how it plays out.”

How well it plays out is something that fans will be able to see for themselves when Atlantis returns for its fourth season, expected to be this summer in the United States.

To hear more from Amanda Tapping — including her recollection of an outtake from “200” that no fan will ever see — watch for GateWorld’s all-new interview in the weeks ahead!

Thanks to GABIT and Amanda Tapping for graciously giving GateWorld time out of their busy schedules!