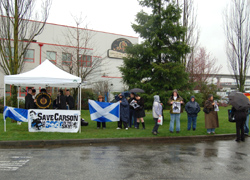 Beware of major spoilers for the upcoming Stargate Atlantis episode “Sunday” in this report!

Fans of Stargate Atlantis‘s Dr. Carson Beckett — and Paul McGillion, the actor who plays him — rallied outside of the show’s Vancouver set yesterday! The protest decried the producers’ decision to kill off the character late in the show’s third season.

Organized by fans at the SaveCarson.com campaign, the event was set to coincide with this week’s Stargate convention in the area, and eventually drew more than 100 people.

Along with signs — and lots of umbrellas to hold back the Vancouver rain — the centerpiece of the demonstration was an authentic Scottish pipe band. 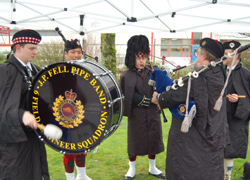 Carson is gone, but the band plays on!

Actor Jason Momoa (“Ronon Dex”) was the first to come outside and offer his support to the fans, telling them, “I miss him, too.” Rachel Luttrell (“Teyla Emmagan”) and David Hewlett (“Rodney McKay”) later came out to say hello, as well.

Atlantis writer and co-executive producer Martin Gero was on hand to interview fans for a potential DVD featurette, while the always well-dressed Joseph Mallozzi (executive producer) also came outside to talk with fans and with the press. Since no one is ever permanently dead in sci-fi, Mallozzi — dressed in a black, three-piece suit with “scorpion cufflinks” to play up his role as the “evil producer” — told fans that if they managed to get media coverage on a major U.S. show such as Entertainment Tonight or Access Hollywood, he will write Beckett into at least two episodes in the second half of Season Four. 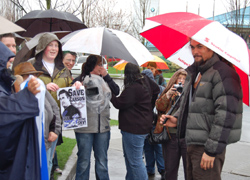 Jason Momoa shows solidarity with the soggy but enthusiastic fans.

The cast and crew of Atlantis were abuzz throughout the day about the demonstration, which also drew significant media coverage from Vancouver’s television, radio, and newspaper news outlets. CBC, The Vancouver Sun, The Province, CityTV News, and United Press International were among those who covered the event.