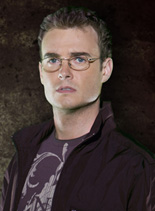 The next revolution in online multimedia is approaching. GateWorld has learned exclusively that Sanctuary, the webisodic Internet series starring Amanda Tapping and Chris Heyerdahl (“Halling,” “Pallan”), is premiering globally in May on SanctuaryForAll.com.

The news comes from Executive Producer Damian Kindler, creator of the series, who spent a gracious portion of his weekend describing the show to GateWorld in greater detail than had previously been reported (story). Beware of spoilers for the series below!

“The basic pitch would almost be ‘The League of Extraordinary Gentleman’ meets X-Files,” Kindler tells us. “It’s a show set in an undefined, somewhat Gotham City world with a foot in historical Victorian-era London.”

The heroine of the series, Dr. Helen Magnus, will be played by SG-1’s Amanda Tapping. The character is at least 150 years old — “but looking not a day over 35!” Kindler says the series will revolve around “her ongoing quest to find, help, protect, [and sometimes] stop these creatures that walk the earth … It’s very dangerous, tricky work, but she’s one of these people who’s been doing it for so long. God knows how many prot‚g‚s she’s gone through.”

The explanation into Helen’s age will not be something immediately revealed. “Her rationale is that when you treat creatures with incredible powers, sometimes the gifts are unexpected. That’s all she says [in the pilot], and it’s all we’re going to tell you now.

“Obviously there’s going to be a ‘How Magnus got old’ episode somewhere in the future. I just don’t believe in spelling it all out in the pilot. There should be a lot of unanswered questions that should keep people wanting to come back to have those questions answered … I’ll put it this way: She’s not happy about her condition — at all. It’s not like she lords it over people or even enjoys being the age. I think at a certain point she realizes ‘Who wants to outlive her children? I’ve outlived so many friends.’ For her, finding the cure to her longevity is an ongoing issue.”

The pilot of the series will join Magnus when she discovers her next prot‚g‚, a psychiatrist named Will Zimmerman. “[He’s] played by a wonderful actor, you’re all going to love, named Robin Dunne,” says Kindler. “He’ll give you a quirky, young Michael Shanks feel. He’s really a great guy. He does humor well. The chemistry between him and Amanda is tremendous. He’s a real find. And it’s about being sucked into this world of monsters and good and evil, and basically having everything he thought was real undermined by this woman and what she does.”

Atlantis’s David Hewlett will also make an appearance in the pilot, Kindler explains. “[He] plays a very, very quirky, interesting character named Larry Tolson. A very unbalanced young man — former patient of Will Zimmerman’s. He does a lovely cameo appearance in the first hour. We fully intend to bring him back at some point, availability pending. He’s just fantastic.”

Former Atlantis regular Paul McGillion (“Dr. Carson Beckett”) will also appear as a recurring character named Wexford. “He’s not fully human. I’ll tell you that.” Another regular, also a familiar face, is Ryan Robbins (“Ladon Radim”). Little is known about his character beyond being a weapons and tech expert in the series. “He’s the great-great grandson of Magnus’ first ever weaponsmith,” Damian reveals. “His character basically grew up in the sanctuary.”

Kindler, Martin Wood and N. John Smith are delighted with the interest that their brainchild has rightfully garnered. But they are aware of their connections with Stargate and do not intend to abuse it. “We didn’t create Sanctuary to poach SG-1 and Atlantis,” Kindler tells GateWorld. “We want people to come to us because we’re interested in doing it, and we make sure everything is cool. We’re not overusing the characters or abusing our access to all this amazing talent, or overreaching our boundaries.”

Damian says to expect the next trailer to hit SanctuaryForAll.com next week, packed with eye-popping special effects. Until then, Sanctuary‘s first fan site has launched at SanctuaryFans.com.

Stick with GateWorld for the latest in this groundbreaking series, and for the complete interview with Damian Kindler later this week!