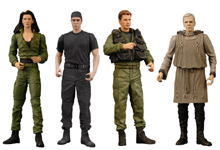 GateWorld continues our on-going Q&A with Stargate action figure creator Diamond Select Toys, with questions submitted by readers at GateWorld Forum! We are currently taking questions for the next round, so visit the forum if you have a question you don’t see answered here — or in these previous installments:
Part 1 – Part 2 – Part 3 – Part 4 – Part 5

The third seriesof SG-1 figures is expected to be available April 11, including figures for Cameron Mitchell, Vala Mal Doran, Black-Ops Daniel Jackson, and an Ori Prior. The first wave of Atlantis figures has been announced for a fall release, including Elizabeth Weir, John Sheppard, and a Male Wraith.

Questions below are organized by each release series. Our thanks especially to Michael and Chuck at Diamond Select Toys for participating!

Will the SG-1 and SGA figures be one line with alternating waves (SG-1, SGA, SG-1, SGA, etc.), or will they be separate lines?
Each line will have slightly different packaging but with characters crossing over its really hard to say one line is separate from the other.

How many waves should we expect of SG-1 and Atlantis?
As many as the fans will buy! We love doing these and MGM is happy with the job we’re doing, so we’ll go as long as you want us to.

Does the license for Stargate SG-1 and Atlantis include anything other than action figures? If so, what else does your license allow you to produce?
I’m not sure I know what you mean, but we have the rights to any character from either of those shows.

Will you release SG-1 in their offworld outfits in a special 4-pack?
We’ve considered it — time will tell. Honestly we haven’t decided yet.

If the license is renegotiated, can a playset of the Stargate be made as one piece? Could it have electronic, light-up chevrons as well?
Production and costing would make a 3- or 4-foot tall gate very unlikely, sorry!

Will you be re-releasing the series 1 figures at any point, since they all sold so fast? Also if you do, will you fix their knees?
No plans right now for a straight re-release and we don’t consider the knees “broken” — its just a mater of preference between playability and style.

Were the neck joints made with easy head-swapping in mind (e.g. swapping General O’Neill’s head with Daniel’s to get Daniel in garrison uniform and older Jack in offworld gear), or is it an unforeseen convenience?
The joint was NOT chosen for that reason.

Is the Serpent Guard going to be rereleased in the future with the Horus helmet seen in some episodes?
Not in any of our plans just now.

Will there be an Elite version of Serpent Guard Teal’c?
We don’t have one planned right now.

While viewing pictures of the Anubis figure, it looks like his sleeves are incorrect and don’t match his poofy ones in the series. Will these be corrected?
We do the best we can to match the show as accurately as possible with an eye toward costing and production, so I think this is just one that for now will stay the same. Sorry!

Also, will there possibly be an alternate hood for Anubis with his water-like face shield?
We don’t have that in our plans.

Series 1 had O’Neill in full black-ops gear. Why the decision to make Black-Ops Teal’c and Daniel as T-shirt versions?
That way it would work if you we’re collecting either all the black-ops versions or all the T-Shirt versions — plus we needed an excuse to show off Teal’c’s guns.

Will Black-Ops Teal’c come with the same acessories as Off-world Teal’c?
This figure is in stores now.

The SG-1 series 2 figures list “Desert Combat Samantha Carter” as a variant figure along with the other series 2 figures and Replicator Carter. When is this figure due for release?
We’re not 100 percent sure yet but we’re confident we’ll find a home for her.

At Toy Fair last year, Off-world Carter was seen with what appeared to be the small, rectangular naquadah generator from “Learning Curve.” What happened to this accessory?
Not sure about that — I’d have to go back and look.

Will you have a new mail-in figure with series 3 (such as a black-ops Carter), which has not been announced yet?
No, not for this wave.

Will the bodies for series 3 Daniel and Colonel Mitchell have articulated knees?
No, they will not have hinged knees.

Will Vala come with a vest?
No, she will not have a vest.

Will Mitchell and Vala have the same articulation as the series 2 figures?
Yes.

Are Mitchell and Vala going to come with pieces of the D.H.D.?
Vala has the communication device and Cam and the Prior have parts of the D.H.D.

How many pieces will the Atlantis gate and ramp come in?
We’re doing four total pieces again.

Since Dr. Weir does not have too many possible accessories, will she come with a Z.P.M.? She used them in “Before I Sleep.”
She comes with part of the gate and a couple other accessories.

Can the new SGA figures come with the anti-Replicator guns that we see in Season Three’s “The Return?”
We’ll announce the accessories very soon.

What kind of accessories will Field Ops Sheppard have? Will he have a P-90 like in the show? And will he come with a life-signs detector?
See above.

Will you be making characters who have made infrequent recurring appearances, but are important to the Stargate universe (for example, Dr. Catherine Langford, President Hayes, Senator Kinsey, Major Paul Davis, etc.)?

Will Walter or Martouf be immortalized in figure form?

Will DST make Lucian Alliance figures, or Colonel Emmerson?
We’d like to some day, but we’ll just have to see how all the timing works out.

Do you have plans to make Dr. Carson Beckett, especially considering the recent sad news about the character leaving the series?
I think we’d still like to try to do a Beckett.

What’s with all this hype about Replicator Carter? Do retailers already know about this figure and is it shipping around or after series 3 or 4?
I’d guess the hype is because it’s a cool character from a big part of the show. As for when she’s going to be for sale, I’d say March — so in between series 2 and 3.

What will Repli-Carter’s official accessories be, other than two Replicators and an alternate hand?
I think that’s about it.

Are there any plans to release Sam in her long-sleeved tight shirt, as well as Teal’c in his tight T-shirt, both with green pants?
Not just now, but we’ll see.

In the very first Q&A with GateWorld, DST said that they wanted to create a Thor figure, but that the body would be “very difficult to reuse for anything other than an Asgard.” Now that Thor is being made, does this mean that we can expect the Asgard body template to be used to create other Asgard characters in future waves? Heimdall or Kvasir for SG-1? Perhaps Hermiod for a future Atlantis wave?
You can thank yourself and the other fans for strong sales in series 1 for a reason we went out and did Thor! Not so sure about the other Asgard, though.

If there are plans for Rodney McKay in the second wave of SGA, will he be in his tan Season One uniform, or will he be in his Season Two blue uniform? Or will both be made, one as a preview figure?
Rodney is a fan favorite and a big part of the show so he won’t be forgotten.

Will anymore variants of Jaffa be made, like Horus, Sokar’s guards, or shirtless ones so we can see the synbiote pouch?
Time will tell on this one.

Since the ‘Serenity’ license meant having Adam Baldwin’s likeness sculpted for DST, is there any chance of seeing his “Heroes” character, Colonel Dixon?
He’s really not at the top of our list.

Why did the P-90 and staff weapon end up so mis-proportioned?
We think we did a pretty good job on the staff weapon, but the P-90 needs some work and we’ll improve it if we get a chance. Sorry you’re not 100 percent happy with the weapons.

Would it help for fans to starts petitions for things like an accessory pack to get MP5s, SPAS-12s, open zats, and corrected P-90s and staff weapons?
No, a petition doesn’t help.

Will future figures come with different weapons, like M-4s, SAWs, or MP-5s, or can we expect more P-90s?
Sculpting, costing, and planning-wise the gates and D.H.D. take a lot out of us but we mix in new stuff when we see an opportunity.

After series 1 and 2 of both SG-1 and SGA are released, can the Stargates be released as packs by themselves?
We have no plans for anything like that. We don’t think it would be fair to all the fans that bought the figures.