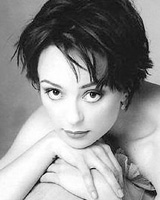 Beware of spoilers for the SG-1 episode “Dominion,” as well as the upcoming movie The Ark of Truth in the report below.

With principal photography on Stargate: The Ark of Truth completed, new details are streaming in from various sources which provide more insight into the franchise’s first ever direct-to-DVD movie.

GateWorld has received confirmation from the management of Sarah Strange that the actress will be reprising her role as the Ancient Morgan Le Fay in the film, expected to be released on DVD this fall.

Le Fay provided covert assistance to SG-1 in the tenth season episode “The Pegasus Project,” posing as a holographic recording in the city of Atlantis to direct them to the location of Merlin’s anti-Ori weapon. She was whisked away by fellow ascended beings in after helping “lowers” in their quest. Her final fate was left open-ended.

The appearance of Morgan Le Fay in the film indicates that fans will see the ascended Ancients in some form, as the Ori storyline draws to a close.

Sci-fi fan site The Scifi World has recently confirmed that actress Morena Baccarin will be also appear in the film, reprising her role of the Ori leader Adria. Adria was last seen transforming into an ascended being after her death in the penultimate SG-1 episode “Dominion” (airing June 15 in the United States).

Expect Stargate: The Ark of Truth to hit DVD stands some time this fall. Meanwhile, the final episodes of SG-1‘s tenth season air Friday nights at 8 p.m. on SCI FI Channel in the U.S.! Stick with GateWorld for the very latest.