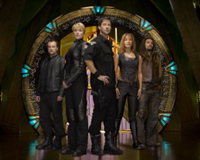 Beware of SPOILERS for the fourth season of Stargate Atlantis below.

With the arrival of a new superior officer (one Colonel Samantha Carter) to report to in Season Four, the character of Sheppard will have to make some adjustments when interacting with his superior.

In real-life, the transition of actresses has also facilitated some changes. Joe Flanigan took time to talk to SCI FI Weekly’s Web site about some of those changes.

“It’s been interesting how we’ve dealt with the transition, going from Torri [Higginson] to Amanda [Tapping],” Flanigan said. “We had long discussions about that. I was concerned the transition was too quick. So I went upstairs and talked to [the writers] and said ‘I think we’re just moving way too quickly on this.’ I felt, shouldn’t we pause, say, ‘Oh, we should try to find Dr. Weir and rescue her — hold out hope that she should come back’…things like that. And so they wrote that back in and tried to create that, and I think we did a pretty good job.”

Flanigan added that creating tension between the characters of Carter and Sheppard has not been the easiest of tasks.

“Amanda and I have tried to find some areas of [conflict]. Drama isn’t interesting when people get along; it’s interesting when they butt heads,” Flanigan said. “One of the problems is she’s such a likable character. It’s impossible to find any fault with her character.

“You can find fault with mine — I’m a smart ass,” he said while laughing. “[And] David’s a pain in the ass. So there we have character faults we can kind of get nailed on. But she’s a deep, functional human being. So I’m trying to find an area of weakness we can all exploit to create a storyline.”

The new season of Stargate Atlantis premieres on the SCI FI Channel on Friday, September 28.