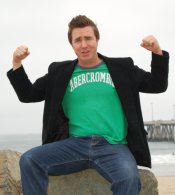 Word has trickled down the pipe that Paul McGillion (“Dr. Carson Beckett”) recently auditioned for the role of Montgomery Scott in the eleventh “Star Trek” motion picture. From the mouth of Paul himself, GateWorld is pleased to confirm that this is so!

“I can’t tell you a whole lot,” McGillion said, “but I can confirm that I did indeed audition for the role of Scotty in the new ‘Star Trek’ movie. It was obviously thrilling to be able to go in and read for that character, seeing as I grow up watching Star Trek with my family.”

It’s no surprise that Scotty was McGillion’s favorite Trek character while growing up, considering both have roots in Scotland. Additionally, both actors have roots in Vancouver. “It was a great honor [to audition], and obviously I don’t want to sound clich‚ about it, but it would be a privilege to try to follow in James Doohan’s footsteps.”

Doohan’s son, Chris, campaigned for his father’s old role, but has stepped aside and endorsed McGillion instead. “I know that the chances that I would be the next Scotty are slim to none,” Doohan told TrekMovie.com. “That being said, I think Paul McGillion is a GREAT choice for the role of Scotty. He has a great accent and I think that he actually looks like my father.”

“I can’t say enough about that,” Paul told us. “Thank you, Chris Doohan! I’ve never met him. That was really a surprise and a thrill. He said some nice things about me. That’s really kind of him. I’m absolutely overwhelmed by that.”

Stick with GateWorld for more with Paul McGillion later this week!