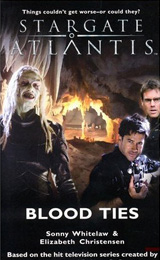 The next Stargate Atlantis novel has been released from Fandemonium! Authors Elizabeth Christensen and Sonny Whitelaw once again join forces to bring Stargate characters to life on paper in “Blood Ties”, the latest Stargate offering from the publisher.

Here’s what they have to say about the story:

When a series of gruesome murders are uncovered around the world, the trail leads back to the SGC—and far beyond …

Recalled to Stargate Command, Dr. Elizabeth Weir, Colonel John Sheppard, and Dr. Rodney McKay are shown shocking video footage — a Wraith attack, taking place on Earth. While McKay, Teyla, and Ronon investigate the disturbing possibility that humans may harbor Wraith DNA, Colonel Sheppard is teamed with SG-1’s Dr. Daniel Jackson. Together, they follow the murderer’s trail from Colorado Springs to the war-torn streets of Iraq, and there, uncover a terrifying truth …

As an ancient cult prepares to unleash its deadly plot against humankind, Sheppard’s survival depends on his questioning of everything believed about the Wraith …

“Stargate Atlantis: Blood Ties” is now available in the United States and United Kingdom. Order it at Amazon.com or Amazon.co.uk and support GateWorld with your purchase. The book can also be found at the publisher’s official Web site, StargateNovels.com.

Don’t forget — Elizabeth Christensen and Sonny Whitelaw continue to take your questions in GateWorld Forum, so give them a shout-out! Meanwhile, more Stargate SG-1 and Stargate Atlantis novels can be found in GateWorld’s complete Books section.