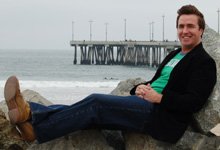 “McGillion has actually already finished shooting for the film, which took a few days back in November,” said TrekMovie.com, who broke the news. “It appears he will be in a scene with Chris Pine (Kirk). Since Simon Pegg had not started working yet, there will not be an on screen meeting between two.”

Stargate fans lobbied to support the actor in the role. Said TrekMovie, “JJ Abrams was impressed with McGillion’s audition and even though he picked his MI3 co-star, Simon Pegg, for Scotty, he still wanted to find a place for Paul.”

Stick with GateWorld for more developments on this story!

(Thanks to Anthony Pascale, Jen, johndoe4880, Matt Pollari, and sueKay for the tip!)