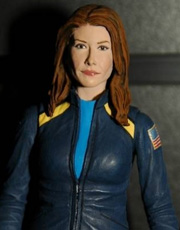 In advance of that release date, DST has just recently announced what characters will be featured in their Series 3 line — and it includes some fan favorites, along with a familiar SG-1 face.

Due in stores this fall, the third series will feature Colonel Samantha Carter in her new Atlantis-style uniform, Dr. Jennifer Keller and one of the muscle-bound Wraith Drones. Also included in this assortment will be an all-new action figure of Lt. Col. John Sheppard in all-black base attire. And fans of the character will be happy to know that Ronon Dex will be released along with this series as well.