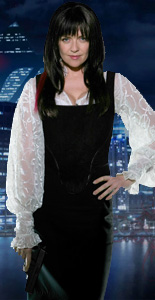 Amanda Tapping‘s new fantasy series Sanctuary is coming to SCI FI Channel on October 3, the week after Atlantis finishes its summer run. The show will have a 2-hour premiere, according to The Futon Critic.

The first half of Stargate Atlantis‘s fifth season will conclude on Friday, September 26, according to the site. That puts 12 weeks between the season premiere and the mid-season finale. One week Atlantis will probably take off for Labor Day weekend. The other week off is still unknown — unless the show breaks with tradition and airs more than 10 this summer.

Tapping, who played Samantha Carter for 11 years on Stargate SG-1 and Stargate Atlantis, is executive producing and starring in Sanctuary, the new SCI FI original which premiered as an Internet series in 2007. The show is filmed on green screen sets, with entire environments rendered later in the computer.

In the series, Tapping plays Helen Magnus, who leads a secret organization that tracks and aids monsters and other “unique” individuals.

Don’t miss the premiere of Stargate Atlantis next Friday, July 11, at 10 p.m. (9 Central) in the U.S.! Learn more about Sanctuary at SciFi Stream.