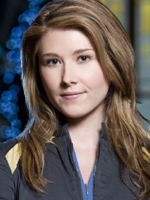 Beware of SPOILERS for Season Five’s “Identity” in the report below.

The first story details have arrived at GateWorld for “Identity,” currently slated to be the eighteenth episode of this year’s 20-episode season. The episode is written by executive producer Carl Binder.

Paul McGillion guest stars in the episode as Dr. Carson Beckett, who by this point in the season has returned to Atlantis from Earth and appears to be back to work in the city’s infirmary.

Dr. Jennifer Keller falls ill and, in Carson Beckett’s opinion appears to be suffering from a psychological ailment. In fact she has been taken over by an alien consciousness, a cunning and manipulative woman named Neeva.

Neeva sneaks out of the infirmary and finds her way to the Puddle Jumper bay, hoping to leave the city. She finds a handgun and pockets it, and unable to activate one of the ships, she is caught by Rodney McKay. She tries to seduce him into taking her for a ride, but he resists. Still believing her to be Jennifer, he tries to get her back to the infirmary — but she pulls the weapon and threatens to shoot him.

The team discovers that Neeva and Keller have switched bodies, using technology hidden away on another world. The device is not like previous body-switching technology we have seen, namely Ma’chello’s mind transfer device. This is Ancient technology, and the two people affected need not be in close proximity to it. The device must also be continually active to maintain the transference.

Neeva has become a threat to Atlantis. Because the transference is two-way, Sheppard’s team (joined by Beckett) must locate both Keller and the alien device that caused the switch. In trade for the information, Neeva demands that the team let her and her accomplices go — with a Puddle Jumper.

Meanwhile, Keller finds herself in Neeva’s body and among the thief’s accomplices, a pair of thugs named Jannik and Bordal. The men don’t realize that Neeva has traded bodies with someone, and treat her as their ring leader. She is a wanted fugitive, and the villagers Neeva has stolen from are on the hunt. Not only does Keller have to worry about evading a manhunt … but Jannik and Bordal are growing suspicious of her.

“Identity” may air this December in the U.S., should SCI FI air the entire season without a break.