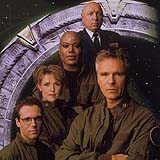 Author Steven Savile has exploded onto the publishing scene the last few years with dozens of works set in the worlds of Doctor Who, Warhammer, Star Wars, Jurassic Park, Torchwood, and his own universes. He has now joined Fandemonium to pen a trilogy of Stargate SG-1 novels set in the middle of Season Five.

GateWorld caught up with Steven to ask him about how the novel deal came about.

“It was an interesting time for me personally,” the author said. “I’d just finished writing the Primeval novel and come to the realization that I had said everything I had to say about vampires [the Black Library Vampire Wars series] and had no interest in writing my fifth vampire novel in three years. You get a little worried about repeating yourself — and there’s only so many ways to suck neck, after all! Then I heard that Sally Malcolm was looking for new writers for the SG-1 and Atlantis lines. A few e-mails later we were fast friends and a huge idea was spawning.”

Writing an excellent media tie-in novel is filled with challenges, but Steven has the experience, and a record of success, at bringing other people’s universes to life. “It gets tricky on a page-by-page level,” Savile said, “because at the end of the day Doctor Who belongs to the BBC, Primeval is all Impossible Pictures, and SG-1 is MGM. You can’t suddenly turn Jack O’Neill into a deep, brooding, philosophical character who quotes Jung and ponders the meaning of life, the universe, and everything. You have to be true to the creator’s vision. You have to study mannerisms, speech patterns, even the dynamic of how they stand in a room and learn to anticipate what they’d do in a given situation — and make it real.

“With your own stuff you’re making these decisions, you’re not looking at some pre-existing template, which means it is both easier and more difficult. Nice fudge, huh? Stargate has a lot of interesting challenges, notably the balance of action, depth, and humor. You want to match the feel of the show, not go off into some deep, dark place where Jack never jokes and Teal’c is gregarious … though, that could be an interesting mirror world twist!”

When we asked about the specifics of the trilogy, Savile said that he has “been fascinated by the experiments of Sigmund Rascher and the developments in aviation knowledge they led to, and how they came from such a dark place in humanity’s life. And I’ve had a hankering to do something with Joseph Campbell’s monomyth / hero quest. So my first thought was could I find a way to interlace these ideas. I did.

“Things start off with a bang — Tok’ra agents being compromised, a search and rescue that goes hideously wrong, and a time shift that drops our heroes in a world tearing itself apart from the inside out. It is a quite dark story in places, I freely admit, but it (hopefully) isn’t preachy. It’s a trilogy: ‘Shadows,’ ‘Shapeshifter,’ and ‘Trickster,’ which the astute reader will spot immediately as being part of the archetypal characters of the monomyth — a big hint, right there.”

Savile promises to make this trilogy an SG-1 event not to be missed. “One thing Sally and I were very conscious of was making something big,” Savile said. “What we’ve done is basically plot out an entire season arc in the trilogy, so instead of getting an extra episode we’re offering up enough thrills, danger, excitement, humor, and story for an entire season — and with a limitless special effects budget. So we’re talking some fun, as well.”

Stay tuned to GateWorld for our exclusive interview with Steven Savile when the first book in the trilogy is published in early 2009. Learn more about Fandemonium’s series of Stargate SG-1 and Atlantis novels in GateWorld’s Books section, and visit Savile online now at his Web site.