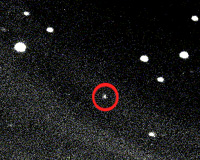 Beware SPOILERS for Stargate: Continuum in the report below!

Think the Large Hadron Collider near Geneva is going to be the end of civilization? Don’t be too sure. A near-Earth asteroid, designated “99942 Apophis,” may fulfill the promise of its SG-1 namesake.

Stargate: Continuum, which arrived on DVD late July, featured the brief return of the villain. While at Gatecon 2008, GateWorld asked actor Peter Williams if he believes the character of Apophis will be seen again. “I’m absolutely certain of it,” he said. “If not on the television screen certainly in 2036, or whenever it is, because they named the asteroid after Apophis!

“Are you aware of that? There’s this asteroid that’s circling Earth. … The guys who discovered this asteroid (also designated 2004 MN4) are Stargate fans and they named it after Apophis.”

Roy A. Tucker and David J. Tholen, two of the discoverers, are reportedly big Stargate fans. “We considered a number of names, but ‘Apophis’ kept floating to the top,” Tholen told Astronomy.com in 2005. “Apophis was a very fitting name for 2004 MN4 not only because of its threatening nature, but also because of its evolution from an Aten asteroid to an Apollo asteroid during the 2029 encounter.”

In 2029 Apophis will pay a close visit to Earth, says Williams, “at which point it’s going to be so close that its trajectory is going to be altered by the gravitational pull of the Earth, meaning that it may hit on its next pass around Earth.”

The next pass is scheduled for 2036, at which time there is a possibility, currently believed to be remote, that the asteroid will impact. “So,” he told us, “Apophis could yet conquer this planet. You heard it here. And it’s true … It’s more than a news story. It’s a movie!”

Williams is quite pleased of the fact that his character has made an impact on the astronomers, and that it was his character and not another villain. “Not Anubis, not Baal, but Apophis,” he said proudly.

According to Wikipedia, the probability for an April 13, 2036 collision is currently at 1 in 45,000. But in truth, the estimate is continually jumping all over the place. One thing is certain: in the grand scheme of things, it will be close.

“[I’m] looking forward to the next Stargate DVD movie,” Williams said in seriousness. “I happen to know Brad [Wright] looks at GateWorld, so Brad, if you’re [reading] this, Apophis is the number one baddy. The asteroid’s going around the Earth — you don’t want bad karma. Put me in.”

Stay with GateWorld for a complete video interview with Peter Williams in the weeks ahead!