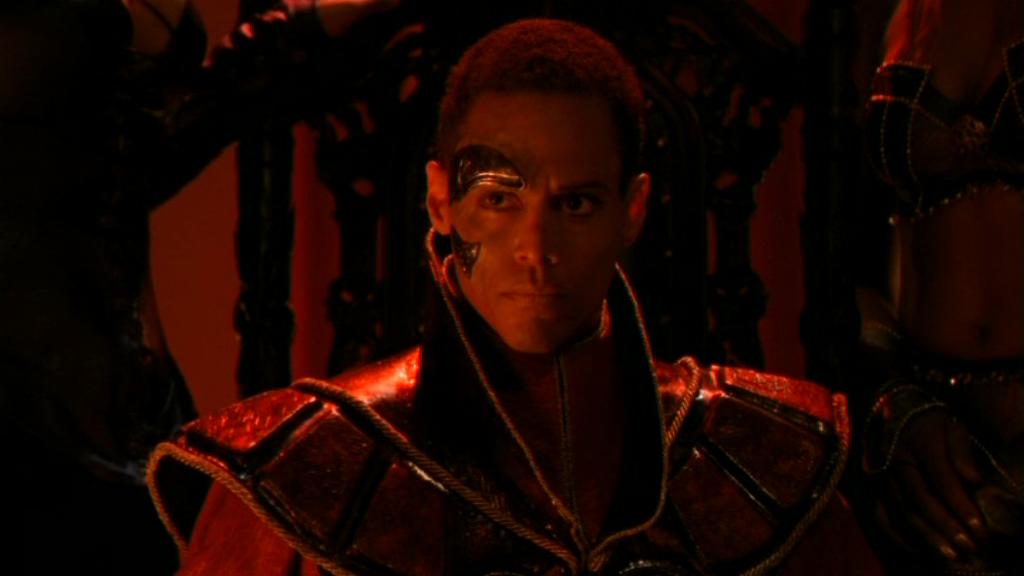 An evil Goa'uld System Lord, once SG-1's arch enemy. He is the brother and mortal enemy of Ra, the sun god. In ancient Egyptian mythology, Apophis is the serpent, the god of the night and of death, and is in constant struggle with the god of the day.

Apophis was a powerful System Lord but had many enemies, including Sokar and Cronus. His attempt to invade Earth was thwarted by SG-1. Apophis died of wounds inflicted by Sokar, but was resurrected by Sokar and further tortured. For a number of months, he served as First Prime to Bynarr, warden of Sokar's prison moon of Ne'tu. His alias there was Na'onak. He later escaped Ne'tu to Sokar's home world of Delmak -- where he assumed control of Sokar's vast army after the latter's death. But when his ship was taken over by the Replicators, Apophis crashed into the atmosphere of Delmak and was again presumed dead.

Apophis and Sha're have a son, Shifu. The child is a Harcesis -- the child of two Goa'ulded hosts -- and possesses the collective knowledge of the Goa'uld who fathered him.

PLAYED BY - Peter Williams
FIRST APPEARED - Children of the Gods

Children of the Gods - Apophis kidnaps Sha're and Skaara, among many others, and implants Goa'uld symbiotes in them. But Teal'c, his trusted First Prime, turns against him and joins SG-1.
The Nox - SG-1 tries to capture Apophis when they find him with a small hunting party on a forested world -- but are thwarted by the pacifist Nox.
Cor-Ai - Teal'c is put on trial for a murder committed when he served Apophis, and remembers the Goa'uld ordering him to kill young Hanno's father.
Within the Serpent's Grasp - Apophis joins his son Klorel in a direct assault on Earth with two motherships.
The Serpent's Lair - Apophis's attack on Earth is thwarted when SG-1 destroys his ships in orbit above Earth. Though they are presumed killed, both Apophis and Klorel escape.
Family - Apophis brainwashes Teal'c's son in an effort to exact revenge and capture SG-1 on Chulak.
Secrets - Apophis arrives on Abydos to reclaim his queen and new son -- but is told that Heru'ur has stolen the child (though Daniel Jackson has, in fact, hidden him away).
Serpent's Song - Captured by Sokar, Apophis flees to Earth, where SG-1 watches him slowly die in the S.G.C. infirmary. His body is sent back to Sokar to prevent an attack on Earth.
Point of View - The team helps an alternate reality S.G.C. narrowly avert Apophis's attack on Earth by contacting the Asgard.
Rules of Engagement - SG-1 finds a training camp set up by Apophis, and must use a holographic projection of Apophis to convince them he is dead.
Jolinar's Memories - The team infiltrates Sokar's hellish prison moon Ne'tu, only to find that Apophis has been resurrected and has started an insurrection.
The Devil You Know - Apophis interrogates SG-1 and Martouf for the secrets of the Tau'ri and the Tok'ra. Though his attempt to kill Sokar fails, the Tok'ra do the job for him -- leaving Apophis in command of Sokar's massive Goa'uld fleet.
Tangent - Teal'c and O'Neill take a retro-fitted death glider for a test flight, only to hear a voice recording of Apophis announce that they will be sent helplessly into deep space -- a booby trap for traitors such as Teal'c.
The Serpent's Venom - Apophis meets Heru'ur in the Tobin minefield to negotiate an alliance -- but when SG-1 and the Tok'ra sabotage the meeting, Apophis destroys Heru'ur and absorbs his large fleet into his own.
Exodus - Apophis brings his huge fleet to attack the Tok'ra base at Vorash, but SG-1 and the Tok'ra cause the sun to go nova and destroy Apophis's fleet.
Enemies - A shockwave throws Apophis and SG-1 millions of light years from our galaxy, where he takes over their ship after a horde of Replicators assumes control of his. But Apophis proves no match for the creatures, which follow him to the new ship, and is presumed dead when his ship crashes into Delmak.
Threshold - Brainwashed by Apophis, Teal'c must remember his past in the service of Apophis, when he came to realize that the Goa'uld are not gods.
The Changeling - Trapped in a bizarre vision, Teal'c sees Apophis appear to him, telling him that he fears death because he knows his god will be waiting for him in the afterlife.
Moebius, Part 2 - In an altered timeline, Apophis captures a team from Earth when they visit Chulak, and implants Daniel Jackson with a Goa'uld symbiote.
Stargate: Continuum - In an altered timeline, Baal becomes the most powerful System Lord and executes Apophis.