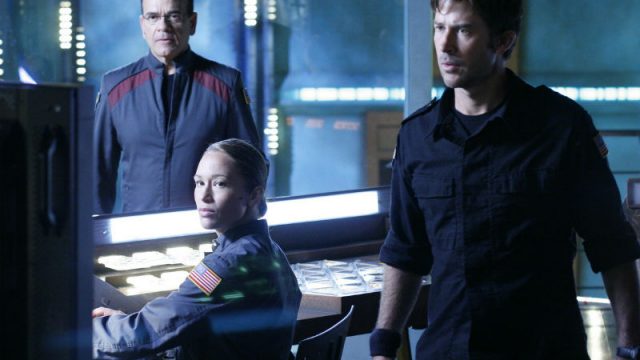 Ratings for the final season of Stargate Atlantis stormed back on Friday night, with “Enemy At the Gate” earning a 1.5 average household rating (Live + Same Day) for the SCI FI Channel, the network is reporting. This is up three-tenths of a point (25 percent) from the December 12 episode (“Identity”).

Ratings for the previous week, January 2’s “Vegas,” are not yet available, though early viewership signs indicate a slight lift over the 1.2 earned by “Identity.”

SCI FI reports that 2.02 million viewers watched the series finale — 973,000 adults in the 18 to 49 demographic, and 1.12 million age 25 to 54. It’s a season-high in key demographic measures, and ties “The Lost Tribe” for the highest rounded-off ratings number.

The network calls it the best performance for an episode of Atlantis since the Season Four finale in March.

Atlantis‘s lead-out show, Sanctuary, drew 2 million viewers and earned a 1.6 rating for its first season finale — its best performance since the series premiered in October.

SCI FI also reports that with time-shifted viewership accounted for (Live + 7 Days figures), Stargate Atlantis averaged a 1.6 rating and 2.1 million viewers for its final season. Sanctuary averaged a 1.8, including its big draw for the series premiere.

So the season finale of Sanctuary does better than the series finale of Atlantis. Ouch.

Look at this way:
A five year old show does .1 less than a brand new show. Means that Atlantis is quite popular after all.

To magictrick, it does stand to reason that a new successful show would do better than a show thats been running for five years. And I am glad that SGA’s final season has done so well. Hopefully the movie does even better.

Wow Magictrick, did you even read the press release? SGA had 20,000 more viewers than Sanctuary.

Not all that great for a series finale.

series finale should have been 2 part

ratings mean nothing to me. I do not think it is an accurate representation on how many people watch the show.

Goodbye Sweet Actors. I hope you all find projects that we will see you all in again soon. I will miss that good looking Joe Franklin and his cocky attitude. He really made the show, he and Tori. I think when she left it killed the show. As in the final episode of Star Trek TNG, “ALL GOOD THINGS”.
I shed a little tear for you and for me. Good-Bye

This might have something to do with the gact that the ending sucked and weall now it. It was made to be two parts and they threw some of these scenes togehter in five minutes and it really shows. I look forward to seeeing the movie however and optimistic for the franchise as a whole!

WHOOOT! WTG AMANDA! I know me & my family and friends watched the Atlantis finale because Sam was back. Too bad i blinked & missed her scenes. :) Just proved to me once again, that it was a good decision that she chose Sanctuary over Atlantis-
And Sanctuary kicked butt! THAT was an awesome season finale! Quite the cliffhanger….can’t wait for next season and many more :) Cheers

First off you can’t really trust ratings. People tivo the show, or download it after it airs and watch the episodes on their time. Friday nights tend to be everyones cut loose night and not all stick around home to watch TV. Second Amanda Tapping would have been the leader of Atlantis for the entire 5th season but because of Sanctuary she didn’t have time to do both. In anyones opinion the lead in a show compared to a shared co-lead is a big improvement for anyone, so it goes to stand that her parts in atlantis are limited. The… Read more »

Atlantis had more viewers than Sanctuary.
Glad both did well.

If I could ask just one question. Just who exactly was the woman who came into the infirmary at the end to invite the ocupant (name withheld for spoiler purposes) to see something supposed to be? A buddy of mine and I have been trying to figure it out

@dgv142: It was Amelia Banks, the kick-butt gate technician.

yeah, Amelia does kick ass, more suited for you-know-who in the infirmary than the other whiner. The finale was very good, but as some one else mentioned, it should have been a two parter. I was constantly feeling as the episode was being rushed, and everything and their uncle, plus the kitchen sink was being shoe-horned into a 45 min episode.

Hope the great actors find other Projects suitable for their great talents. May all your seasons be long ones, and all roles recurring. For the person who called Joe Flannigan Joe Franklin, I just roll my eyes.

ah ok thanks, guess I should have been paying more attention

Just finished watching EatG over iTunes, and while it did appear to cram a whole lot of stuff into the episode, I thought it was absolutely brilliant. It would have been nice to see this as a two-parter, maybe have the first part be the lead-up and end with the Hive arriving at Earth, then the 2nd half is the battle, with whatever else expanded.

Most everyone posting here loves Atlantis, but be realistic, a 1.5 rating is not, not, not good at all. Incesant reruns of HOUSE get a 2.6. Yes we love the show, but we are in the minority of the viewing public. And though our foreign friends don’t like to hear it, the US broadcast is what drives prodution of this show. If it was produced by an English televison network and only run here (IE Dr. Who) maybe SCIFI would be satisfied with a 1.5 high ratings mark. As it stands, it doesn’t pull enough dollars in to pay the… Read more »

cmuty your kiddin right? House is completely different kind of show. a 1.5 is good considering what kind of show it is and where it is being broadcast on. House is a nationalized public show. Atlantis is a cable network show and science fiction. there is a difference. koodos to atlantis. i will miss it. im excited with the new series. the show didnt get cancelled because of the ratings although it had some part. its between the writers and MGM (mainly writers). if the ratings were still off the chart like it was doing on season 1. the writers… Read more »

Just watched the last Atlantis and WOW what a great last episode, so sad to see it go as i was with SG1….good luck to all the brill actors…and i must say i tear come to my eyes when they re-named the pheonix to the GENERAL HAMMOND..respect!

ricko30
I was talking about reruns of HOUSE on the USA cable network that run 5 times during a weekend. It doesn’t matter that this is a scifi show, the rules of economics effect it the same way.

You can go on thinking a 1.5 rating is good and a 1.8 is “off the charts”, but the reality is that you are wrong. If this show had 4 million viewers it would still be on the air regardless of Universe or any SG movies being done.

Bottom Line it would have been a great episode but it felt way rushed.

It was a great episode but it was rushed and should have been a 2 parter, it just had something missing. I have to admit though I really enjoyed Vagas as much as this one.

It was for a season ending show with that anticipated “to be continued feel” BUT not a season finale.

THE FIGHT FOR MORE STARGATE TRAVEL HAS JUST BEGUN! Trust me folks, it’s not a question of IF the Stargate will open again, it’s a question of WHEN! If we let our voices be heard, it will be sooner rather than later! :D