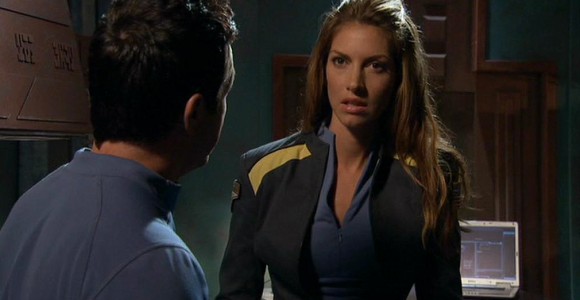 Dr. Keller's body is taken over by a cunning thief, while Keller finds herself imprisoned with a death sentence on another planet.

Dressed in an Atlantis uniform, Neeva Casol is wandering the corridors of the city. Hiding from the strangers around her, she ducks into a lab. As she examines the equipment, Dr. Radek Zelenka comes in with lunch. Noting her confusion, he attempts to escort her to the Infirmary. Neeva grabs a pair of pliers and stabs him. Catching sight of her reflection, she sees Dr. Jennifer Keller, the Chief Medical Officer of the Atlantis expedition, and not herself.

Fleeing, Neeva finds a balcony from which she tosses the bloody pliers into the water. As she turns to leave, she is stopped by Rodney McKay. Believing her to be his girlfriend, Jennifer, he checks her headset – since she didn't show up for their scheduled lunch date. Convinced the headset is malfunctioning, he is surprised when the Infirmary calls to report Zelenka's injury. With McKay leading the way, they head for the Infirmary.

Neeva is able to hide her confusion about being in Keller's body until she is in the operating room to perform surgery on Zelenka. Pleading ill health, she flees again, this time to Keller's quarters. As she searches the room, Ronon Dex arrives. He is questioning her when McKay joins them. He tells her that a Puddle Jumper has been sent for Dr. Carson Beckett, and Neeva's obvious confusion confirms their suspicion that something is wrong with the person they believe is Keller.

A thorough examination reveals that nothing is physically wrong, so Beckett suspects a psychological break of some sort. Left in the Infirmary for the night, Neeva slips out and locates the Jumper bay. She enters an open Jumper and finds a pistol. Neeva is trying to activate the ship when McKay surprises her. Pretending to be Keller, she attempts to seduce him into flying her to the mainland for a night under the stars together. When he refuses, she points the pistol at his head. But before she can harm him, Ronon shows up and stuns her. He, too, has been suspicious of her.

As McKay, Ronon, Beckett, Teyla, Colonel Sheppard and Richard Woolsey observe Keller in the Isolation Room, McKay wonders if she could have been the one who stabbed Zelenka. Some pointed questioning forces Neeva to confess that she and her associates, a pair of thieves named Jannick and Bordal, were rummaging through a room with Ancestral artifacts when, suddenly, she ended up in Atlantis, in Keller's body.

McKay realizes that when the group of thieves broke into a village's vault, she activated an Ancient long-range communication device like the one SG-1 found in the Glastonbury cavern (SG-1: "Avalon, Part 2"). He recalls Keller picking up a tear-drop shaped crystal when she visited him in Janus's lab ("First Contact"). Neeva's mind exchanged places with Jennifer's, as the last person to touch the communications stone. Understanding that if Neeva is killed they will lose Keller as well, Sheppard returns to the Isolation Room to find out what planet Neeva's body (and the device) are on.

Meanwhile, on that planet, a very confused Jennifer Keller finds herself in Neeva Casol's body – in a jail cell. The planet's Magistrate, acting on authority from the newly-formed Coalition ("Inquisition"), plans to execute her in the morning for five murders and numerous thefts.

As village guards walk the vehemently protesting Keller through the woods to her execution by beheading, Sheppard, Teyla, Ronon, McKay and Neeva arrive on the planet via the Stargate. They go to the Magistrate's office seeking the location of the communication terminal, and learn of the impending execution.

Keller is forced to kneel over a tree stump for her beheading. Her protests and pleas – that she is not even Neeva Casol – are ignored. As the executioner raises his axe, he is shot by Neeva's accomplice, Jannick. The guards race after him, and Keller runs into the forest where she is captured by Jannick and Bordal. Believing her to still be Neeva, they have rescued her from her captors. They take her to their cave hideout, where Jennifer fails to convince them she has a plan to escape the planet. She tries to stall for time.

Evading local patrols while searching for Keller, the Atlantis team also looks for her. Neeva seizes the opportunity to escape from Ronon, who was watching her. She makes her way to the cave. Jennifer learns what has happened to them and is eager to confess to the men that what Neeva (who looks like Jennifer) is saying to them is true. Confronted with one woman who looks like Neeva and a second who has Neeva's knowledge, the men decide to take control and head for the gate with both women. Jannick wants to shoot his way off the planet – a plan that will surely kill them all. A village patrol finds them, and Bordal is killed in the firefight. Neeva prevents Jannick from killing Keller in retribution, even as Neeva herself is wounded by the patrol's gunfire.

Alerted by the noise, the Atlantis team locates the injured Keller's body and takes her back to the Magistrate's office for emergency surgery. Carson Beckett is on hand to remove the bullet and patch up Keller's body. Sheppard insists on being shown the communication device, and convinces the Magistrate. As they look for a shut-off switch, the fleeing Keller (in Neeva's body) runs into Jannick in the woods. Confused by her unlikely story of body-swapping and feeling betrayed, he aims his weapon at her head.

Rodney still can't find a way to shut off the communications terminal that is keeping the women's minds in one another's bodies. Pressed for time, Ronon simply blasts it. It immediately powers down, returning Keller's mind to her body. She wakes up on the operating table, stable thanks to Carson's handiwork. Neeva, meanwhile, finds herself back in her body – just as Jannick pulls the trigger.

Back on Atlantis, Mr. Woolsey tells McKay that although Major Lorne's team searched for Neeva, they did not find her. The Coalition will be on the look-out for the thieves.

Bearing chocolates and flowers, Rodney pays a romantic visit to Jennifer. As Dr. Beckett takes the still-recovering Zelenka to another room, Jennifer tells Rodney that after she is released she would welcome a picnic and night under the stars.