Enemy At the Gate 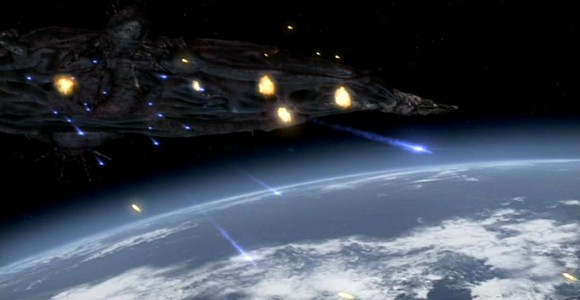 The team learns that a rogue Wraith has acquired several Z.P.M.s to power a formidable new hive ship – and he is headed for Earth.

A fully recovered Todd ("Infection") steps through the Stargate into Atlantis, bringing news of a new Z.P.M.-powered Wraith hive ship. It must be stopped before it is fully matured, and virtually invincible.

Todd reveals to Lt. Colonel John Sheppard and his team that he stole a number of Zero Point Modules from the Replicator home world when he participated in the coalition effort to destroy it more than a year ago ("Spoils of War"). Ever since, his scientists have worked to wed the Ancient power source to Wraith organic technology. Recently one of Todd's underlings made the breakthrough – but instead of handing over the advancement, he used it to attack Todd. Suspicious and wary, expedition commander Richard Woolsey, Colonel Sheppard, and the team know they have no choice but to investigate.

Aboard the Daedalus, ship commander Steven Caldwell grants Sheppard and his team consent to approach the super-hive in a cloaked Puddle Jumper. Rodney McKay's analysis has barely begun when the Jumper is targeted by improved sensors capable of penetrating their cloak, and fired upon. The Jumper is damaged before the Daedalus joins the fight. The Earth ship's powerful Asgard beam weapon inflicts only minor injury on the larger, denser hull of the super-hive. The Wraith launch a massive assault. The Daedalus loses shields, weapons and hyperdrive – but instead of finishing them off, the super-hive jumps away.

McKay thinks the Wraith ship may have simply exhausted its energy capacity. Dr. Kavanagh, however, recorded a subspace signal that reached the super-hive just before it jumped. It's a Wraith code laced with radiation. He doesn't recognize the energy signature on the transmission, but McKay does: The signal crossed through a subspace rift from an alternate reality ("Vegas"), a phenomenon that Rodney has seen before ("McKay and Mrs. Miller," "The Daedalus Variations"). The transmission contained the location of Earth.

By the time the Daedalus returns to Atlantis, the Sun Tzu and the Apollo have engaged the super-hive in the vast distance between the Milky Way and Pegasus Galaxies. Both Earth vessels were heavily damaged, while the super-hive sustained no injury. The only good news is that no other Wraith hives detected the signal. McKay believes the super-hive would be the only one with sensors capable of detecting it.

With the Odyssey away on a super-secret mission, the only ally Earth will have in the fight against the super-hive is Atlantis herself. Launching into space again will require a full complement of Z.P.M.s. Sheppard goads Todd into supplying them with a location, and Major Lorne's team retrieves the power sources for the city.

Woolsey sends Sheppard back to Earth via the Stargate to operationalize the Ancient weapons platform in Antarctica. Colonel O'Neill wants him in the chair when the Wraith arrive. Dr. Carson Beckett will man the Atlantis control chair, taking the ship off the planet's surface and home to Earth. As the city prepares to leave the Pegasus Galaxy, Woolsey offers Teyla and Ronon the opportunity to remain behind – but they choose to stay and fight alongside their friends.

At Stargate Command on Earth, Sheppard is greeted by Lt. Colonel Samantha Carter. Due to take command of the newly-commissioned ship named after General George Hammond (who recently passed away of a heart attack), she is in charge of the base while General Landry heads a task force in Washington. Major Paul Davis from Homeworld Security shares images of the super-hive, which is now parked in lunar orbit. Sheppard wants to dispatch F-302s fighters armed with nuclear warheads.

The powerful hive ship is keeping its distance, since the Wraith signal from the other reality also warned it of the Ancient weapons platform – which was recently relocated to Area 51, in keeping with the Antarctica Non-Proliferation Treaty. To try and take it out, the Wraith launch an attack with a massive wave of Darts. Despite the best efforts of Sheppard and the F-302 pilots, some Darts make it through and destroy Area 51. The Ancient chair is also destroyed. Sheppard's ship is damaged in the fight, and after recovering from a tailspin he heads for space, where he plans to shoot his way into the super-hive's Dart bay and detonate his nuclear warhead inside the ship.

When Atlantis drops out of hyperspace at the edge of the Milky Way Galaxy, Dr. Zelenka tries to dial the S.G.C. gate. But the Wraith have anticipated this, and brought a Stargate along with them from the Pegasus Galaxy. Because Pegasus gates have precedence, the wormhole connects to the gate on board the super-hive instead. Though they have no way of contacting Stargate Command, Woolsey sends Ronon, Teyla, McKay and Major Lorne through to try and sabotage the Wraith vessel.

Zelenka tells Woolsey about McKay's research into the breakthrough concept of wormhole drive. It works basically using the same principle as gate travel itself – creating an artificial wormhole for nearly instantaneous travel across vast distances. While unstable and requiring enormous power, it could have Atlantis in Earth orbit within seconds. Knowing that the super-hive is already at Earth, Woolsey gives the go-ahead for the risky plan.

As Sheppard shoots his way into the Dart bay and parks his 302, the Atlantis team fights its way through the ship. Ronon fights off a group of Wraith warriors, saving McKay's life – but is stabbed from behind, and dies on the corridor floor. Sheppard calls the S.G.C. to report arming the nuke, and Rodney's headset picks up the communication. He tells John to stop what he is doing, and the team rendezvous with him. McKay rigs the nuke for remote detonation before they head for the Stargate. Along the way, they find that a Wraith has restored Ronon to life for questioning. They free him and head for the Stargate to escape.

The Wraith power up their weapons to attack Earth, and the team is out of time. Carter orders Sheppard to detonate his nuke even though the Atlantis team is still aboard. But before they flip the switch, Atlantis appears between Earth and the super-hive. Beckett fires the drones, keeping the much larger and more powerful enemy vessel at bay long enough for Sheppard and the team to get to the Stargate. The super-hive weapons pummel Atlantis, reducing its shield strength.

Drained of power, Atlantis risks destruction as it is pushed down into Earth's atmosphere. Still, Beckett maintains the drone assault. Dialing the Alpha Site, Sheppard arms the nuke before the team escapes through the Stargate. The device detonates, and the super-hive is destroyed.

Atlantis continues its forced descent, creating a massive fireball over the North Pacific. The Navy quickly cordons off an area near the Golden Gate Bridge as the cloaked city soft-lands on the ocean's surface, just outside of San Francisco Bay. The team returns to the city, and everyone is safe. And after millions of years in the Pegasus Galaxy ("Rising"), the lost city of Atlantis has come home.