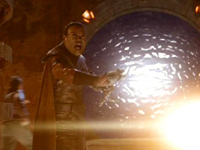 As previously reported, The Ark of Truth will air Friday, March 27 at 9 p.m. on the cable network (story). The film picks up where Season Ten of the show left off, and wraps up the two-year Ori story arc.

Continuum will follow the next week, airing on Friday, April 3 at 9 p.m. More or a stand-alone adventure than Ark, the second film follows the last of the Goa’uld System Lords, Baal (Cliff Simon), as he travels back in time to prevent the Stargate program from ever coming into existence. Richard Dean Anderson makes a special guest appearance.

The two films were first released on DVD last year (in March and July, respectively).

What about future adventures for SG-1? While MGM has not yet officially announced anything, a script for a third film — centering on Anderson’s Jack O’Neill — is in the works. Stick with GateWorld for the latest!

NEXT: The complete press release

Wow, just like that Amanda now gets top billing in the press release. I guess Scifi and MGM consider her the lead of SG-1 now that her show is a hit. Good for her.

Anyone else think we probably would have gotten our season 11 if TPTB had rolled the dice on Tapping instead of Browder?

You know what… they wanted their direct to DVD movies and now they have them. I bought them and so therefore have no need to watch Sci-fi and their crappy programming. Good riddance. As for SGU and the Stargate franchise I wish MGM would take Stargate to the big screen… or at least network TV and ditch this poor excuse for a cable network.

If by “blockbuster movies” you are talking the usual planet of the bug people junk “Sci-Fi original movies” than I think I’ll pass.

Wow, just like that Amanda now gets top billing in the press release. I guess Scifi and MGM consider her the lead of SG-1 now that her show is a hit. Good for her.

Anyone else think we probably would have gotten our season 11 if TPTB had rolled the dice on Tapping instead of Browder?

I still cannot believe that the US is getting the movies aired so late! As has been said so many times, Sky1 in the UK (which is available in both UK and Ireland) have been airing both movies repeatedly over the past year!

Since the Stargate franchise in general is mainly funded by the SciFi Channel, I really cant understand why their own TV network is one of the last to air them! They should have been the first to air IMO! lol.

Orion2…majorsal…I am in 100% total and complete agreement!

1) It’s ridiculous that Sci-Fi are the last to air their own movies only a **year** after the UK’s Sky1 already has done!

afblue07 – Networks don’t bring on shows that at BEST bring in 2 million viewers. They cancel shows that have 3 times those ratings.

The reason scifi is broadcasting the shows so long after foreign networks is that the strategy was to release the DVD’s in the US first and on television in foreign markets first. It seemed to work since the DVD’s sold pretty well here in the US.

I’m not sure but isn’t SKY1 a pay channel as oppossed to scifi being basic in the states?

“”Wow, just like that Amanda now gets top billing in the press release. I guess Scifi and MGM consider her the lead of SG-1 now that her show is a hit. Good for her.

Anyone else think we probably would have gotten our season 11 if TPTB had rolled the dice on Tapping instead of Browder?””

I TOTALLY disagree on this. Amanda Tapping is a great supporting actress but she fails horribly in a lead role (IE, Atlantis & Sanctuary). Browder had prior experience in a lead role and it showed quite well.

Ranga14– Seriously? Fails horribly in a lead role? She was the female lead on SG-1 for its entire TEN YEAR run. Then Joe Mallozzi went to her door and begged her to be on SGA. Then she left (even though they really wanted her to stay) to star in and executive produce her own show. She hasn’t stopped working as the lead of a show since SG-1 began way back in 1996. You’ll be sorry to realize that’s well before and well after Ben Browder’s stints on the little known Farscape and SG-1. And Tapping has already been asked to… Read more »

Just like Orion2 mentioned about the UK, the Space channel has been showing both The Ark of Truth and Continuum here in Canada, for the past couple of months, I think. I don’t really understand MGM’s strategy regarding the DVD releases, especially here in Canada considering that we could easily get them from the US via any retailer that sells on the internet.