Fans who are eagerly awaiting the July 21 North American release of Stargate SG-1: Children of the Gods – Final Cut

(possibly the longest title in DVD history) have just a few more days before the revised version of the series premiere arrives on DVD.  We’ve seen it, and we liked it a lot.

While we’re putting the finishing touches on our review of the film, here are some screen grabs from the disc’s menus: 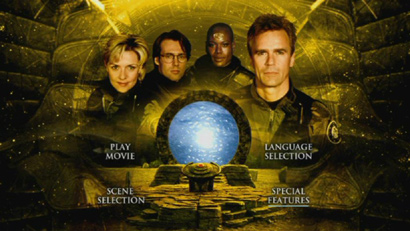 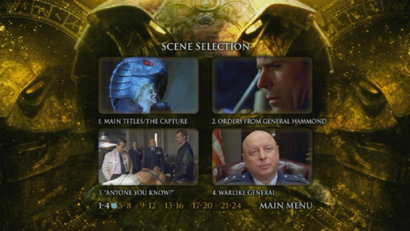 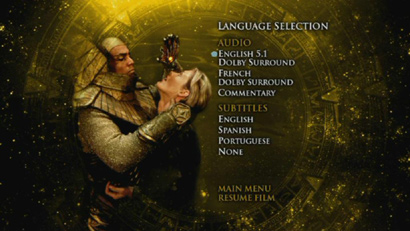 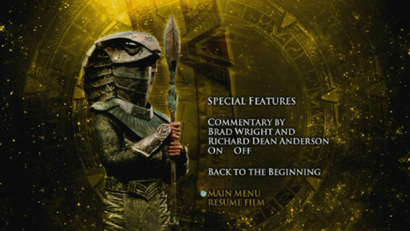 The menus on this release are static shots, as with previous Stargate releases.

Bonus features include a 7-minute featurette on the recutting process, and an audio commentary by co-writer and co-creator Brad Wright and actor Richard Dean Anderson (“Jack O’Neill”).

Pre-order Children of the Gods – Final Cut at Amazon, and stay tuned for our full review later this week.

I don’t think I’m gonna buy it, I was just to have a kid friendly Pilot episode around. But the fact that it’s still rated (15) in the UK and cost £16 (over $20) which is almost the what I pay for a full season and the lack of special features I think it’s only worth a rent. I hope people don’t buy it because although I want to support the show, I’d rather have no Stargate than re-hashed episodes. Maybe that’s a little harsh but it just seems too pricey, if this is how much it costs them to… Read more »

Also I thought they said they re-shot the first scene, that thumbnail on the DVD looks the same as it was before.

Bonus features include a 7-minute featurette on the recutting process, and an audio commentary by co-writer and co-creator Brad Wright and actor Richard Dean Anderson (“Jack O’Neill”).
Well thats great, but 7 minutes is that all?
Nice those screencaps but maby a trailer would helps more then pics.

Cool! Cannot wait for this! :)

i would like to see a new trailer for this

“Don’t Be a Menace To South Central While Drinking Your Juice in the Hood” ? :P

Might have to pick up this dvd, despite having seen the episode countless times. Just to see what’s new :)

“a brand new voice performance by Christopher Judge” – who long did it take them to get him to dub the word ‘indeed’? Why did they need to dub it anyway wouldn’t that just break continuity with the change in his voice.

@kzap333: Brad said he wanted to reshoot the opening scene, but ended up not. The film does open in a different way, however.

When will the review be out? I’d like to decide if I’m going to get it before it comes out.

@Trekky: Our review should be up by Saturday-ish, if all goes according to plan! Definitely before the DVD is out on Tuesday.

Well, I have pre-ordered this new cut but I sure hope it’s worth the money. Most of the time these re-cut movies are just a waste of money. I guess I am just in withdrawl since my Gates are gone. I sure hope Universe is great. I can’t wait much longer. PS guys- Warehouse 13 is like Friday the 13th with the bad objects they had to recover. Seems too similar.

Is there any word if this is going to be released on Bluray? Now that I own a player I would prefer to have bluray instead of dvd. I am going to hold off on this purchase until I find out.

Teal’c looks different. Very different. Did they accidentally take out half of his chin?

Even though I don’t buy all that many DVDs, I bought Ark of Truth and Continuum out of loyalty to the franchise, hoping the sales would help keep Atlantis on the air for another season… and look how that turned out!
So guess I won’t be buying this one, no point is there? I even feel like sending my other ones back at this point.

@Sylvia
It depends are you going to watch them again.
We have all the seasons on DVD, Ark of Truth and Continuum, but then we re-watch them every year, I don’t think this will be worth buying, will defiantly rent it though, shame no scenes were even re-filmed in which case it is really pricey for one 2-parter.

I was under the impression the next Stargate DVD would be a remake of the pilot, not a recut version.. :(

The likely scenario in my case: download, watch and if i intend to *ever* rewatch it i’ll order it the next day. Right now i’m not impressed with what it has to offer..

Someone mentioned a trailer.
I imagine any trailer for this episode would end up as the ultimate spoiler, as there isn’t much new added here..

@Barryke
How could they remake the pilot everyone would be too old.
The original ideas was to reshoot the scenes without SG1 in, then they were just going to reshoot the first scene, now it’s just a re-edit.
And from what I can tell it’s not any longer, they cut out the nakedness and stretched out some of the other scenes, but it’s not like the original was cut down anyway.
I’ll rent it then buy it if it’s REALLY worth £16, which my bet is it won’t be.

I wonder if it still ends of the cliff hanger for episode two or if they re-edited that somehow to make it more standalone.

There’s two reasons to buy this DVD:
1) To hear RDA’s commentary. Getting insight from the series’ star who was also a creative force behind the scenes will be fascinating.

2) To help fund the third SG-1 film as well as potentially the SGA film. With DVD sales down across the industry, MGM needs a clear demonstration that we’re interested enough to pay the bucks.

I’m with digitalred93 , I’ve pre-ordered it, I only hope CJ’s line :”I have nowhere to go” has been left in the way it was. That line was what won me over for the character of Teal’c. I can’t wait for my copy!