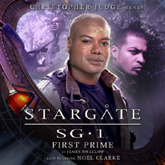 “First Prime” is available on CD and digital download from Big Finish Productions, and launches the publisher’s second series of original SG-1 and Atlantis stories. It stars SG-1’s Christopher Judge, who reprises his role of Jaffa warrior Teal’c, narrating an adventure set early on in the SG-1 series (before the death of Apophis). Here’s now the publisher describes the story:

“Teal’c’s past as First Prime of Apophis comes back to haunt him when Colonel O’Neill and Daniel Jackson are taken captive by the System Lord’s forces. As Teal’c struggles to free them, he finds himself confronted by an old friend and fellow Jaffa, Sebe’t. Can this warrior really be trusted? Or has Teal’c reopened an old wound that can never be healed?”

“First Prime” is written by James Swallow (“Relativity,” “Zero Point”) and directed by Sharon Gosling, with music from Steve Foxon. Its running time is about one hour, and the CD currently runs $16.36 (plus shipping). The digital download is just $8.99. 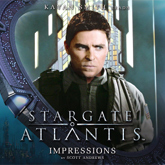 And just released is “Impressions,” a new Atlantis story starring Kavan Smith as Major Lorne and Nicholas Briggs as Dr. David Glennie. Here’s how the publisher describes this story:

“Plagued by blackouts, painting strange pictures in his sleep, Major Evan Lorne begins to fear that he’s losing his mind. Has the stress of life in the Pegasus galaxy pushed him over the edge? Then, when Atlantis itself begins to behave strangely, the Major wonders if something else entirely is going on. But with his behaviour becoming increasingly erratic, who can he trust? And can the soldier convince his colleagues that the answer lies in his paintings?”

“Impressions” is written by Scott Andrews and and directed by Sharon Gosling, with music from Richard Fox and Lauren Yason.  This CD also costs $16.36, or $8.99 for the download.

The 2009 series of audio dramas will include six titles, with SG-1 and Atlantis stories alternating each month.

Pick up “First Prime” and “Impressions” now at BigFinish.com, and check out other past and upcoming audio dramas in GateWorld’s Books section. The next book — the Fraiser-centric story “Pathogen,” read by Teryl Rothery — is due out at the end of this month.

I’m so looking forward to them, especially to the one read by Kavan Smith! Lorne rocks, he so does :)

For anyone who wants a taste of Impressions, I’ve posted the script for the opening scene on my blog – http://www.eclectica.info/index.php?id=227
Scott Andrews

I have the first season audio books and they are really great productions. Looking forward to buy this season also.