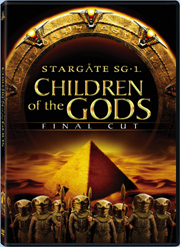 We’ve been talking about the new recut and reimagined edition of “Children of the Gods,” the original Stargate SG-1 pilot movie, since series co-creator Brad Wright first revealed it to GateWorld last year (story).  Yesterday we gave you our in-depth review of the movie, including some highlights of what has been added and what has been removed.

Well, today is the day!  Stargate SG-1: Children of the Gods – Final Cut

is available now in stores throughout North America (DVD Region 1), and online from retailers like Amazon.com.

To mark the debut of the new version, the studio has released some short video clips from the bonus featurette, “Back To the Beginning.”  Here they are:

Comic-Con attendees can grab a discount code for the DVD at the Fox Home Entertainment booth this week, using a bluetooth-enabled phone or iPhone.

Order Children of the Gods – Final Cut at Amazon and support this site with your purchase.  And don’t miss our full review!  We’ll have more on this release soon, as we begin the task of cataloging the changes and additions in GateWorld’s SG-1 Season One episode guide, and adding new screen caps to the Stargate Gallery.

That Pyramid shot was just previs right, because it looked terrible.
And if he knew he would get fans yelling at him why did he do it, I thought this DVD was for the fans.
Obviously we know it’s not it’s for the casual viewer who wants to see how the story started, that’s why they made it fit stylistically with seasons 9 and 10 not 1 and 2.

NOOOOOOOOOO!!!
They used the season 9 wormhole, why? oh why? The season 1-8 one was soo much better and would make sense chronologically because if for some reason the wormhole did change in season 9 at least that makes more sense than it changing in the pilot as well.
Arg! This really annoys me I was hoping the new pilot would fix plot holes not make new ones.
This and cutting out the ending shows it is clearly made for the new viewers who started at season 9 and just want to watch the first episode.

Hell. I’ll buy it, but at the time I don’t have the money to spare. It looks like it could be better. I do agree that the pyramid look was bad looking. Hopefully, it was only VFX temp.

I’m really considering making my own COTG edit, using all the new CG shots from the final cut and just mixing in the original wormhole and the original ending, shouldn’t be to much work.
The DVD still is pricey.

I think i preferred the original pyramid shot, and why oh why did they use the atlantis wormhole animations??? still will buy it and still sort of looking forward to it tho.

I would own my copy already if it were on blu-ray. Why is Stargate so slow to catch on with blu-ray?

I bought it and I love it… I think it’s great that it was redone. The final cut is a lot better than the original. I own all of stargate on dvd: SG-1, Atlantis, and all 4 movies. I love what they are doing with the franchise and can’t wait to see the new movies and SGU.

Well Some things are good what they done, and that are the parts where Samanta Carter came in for the first time. And there was that Just because my sexual organs are on the inside line and the GI JOE thing. I am glad they cut that part out.That was something that always irritated me.I mean she can talk real good for herself,but a little joke is fine but not all the way.I was a bit sad though they cut out the text where Jack said O wanted to say ladies first before they stept trough the gate. I mean… Read more »