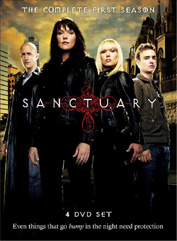 The complete first season of Amanda Tapping’s SyFy series Sanctuary is hitting DVD shelves Tuesday, September 15, according to our friends at TVShowsOnDVD in a report today.

Expect the collection to include audio commentaries for all 13 Season One episodes, three behind-the scenes featurettes, and all eight original Sanctuary webisodes which originally premiered online as an experiment in Internet-exclusive programming.

The four disc set carries a suggested retail price of $44.98, but Amazon is offering it for $26.49. Order through GateWorld and you support us with your purchase!

Season Two of Sanctuary premieres Friday October 9 on SyFy Channel in the United States. Read more about the series on our sister site, Scifi Stream!

I didn’t really like the show.
Love Amanda Tapping but the fake accent keep getting on my nerves and the stories seemed to get more boring as each new episode aired. I stopped watching after about episode 3 or 4.

Season one of Sanctuary will be released on DVD here in Australia next Wednesday, September 9th..

i’m super excited about getting this! i’ve already ordered it on amazon, but think my shipment will arrive after the stores get it. :p

Geez, thanks guys… I have been bouncing all over the house all week long thinking about my dvd’s coming. I finally settle down and you have to go and remind me about it again ;p LOL
WHOOT! Can’t wait until they get here. I already have a waiting list of family & friends who want to borrow them. I may have to get a second set just so I can keep a set & loan the other out. hmmmm the wheels are turning…..

I went to JB HiFi today and asked if they had Sanctuary coming into the stores on the 9th of September and they confirmed it. Hopefully the guy who I talked to will finally watch his dvd’s he received a while back…I highly recommended it to him!! If my copies don’t come in on the 9th through the order I made with Amazon, then I will pick up a copy from JB and give the other one away as a gift…when it should finally arrive! I just don’t want to wait any longer than I have to to see the… Read more »

Its a shame because I really like Amanda but this show is just okish border line pooor an the accent “oh” the accent is just plain awful an grates with every word, it one of the major factor that puts me off, combine that with weak stories an ok acting overal “emm” no wow factor. That said its a watchable show on TV assuming nothing better is on else where. But buying the DVDs type of show “it aint” IMO. I’ll check out season 2 in the hope it improves, I have my fingers crossed as I do like Amanda,… Read more »

You can “watch-it-now” in HD on Netflix.

It arrives in the UK October 19th

I like Amanda alot, I really do. I just wish the show weren’t all green screen. It makes it look like a comic book to me. Also, the stories need to be a little darker. With the kind of characters it really should be edgier and darker. I think that could make it great. Universal/NBC either loosen up the purse strings or don’t make it. We already lost “Torchwood” which is camp but thats what makes it fun. Keep those Star Trek jokes in SGU guys. We apparently also lost “Dr. Who” which is about as dumb as it gets… Read more »

Woo Hoo, that’s awesome news :).I’m even more excited now, I can’t wait to see the features and how the DVD menus look. The features are always one of the things I look forward to the most, and I think I’ll like these. ;)

flmatthew–
“It makes it look like a comic book to me” —that was part of their vision for the show
“Universal/NBC either loosen up the purse strings…” My understanding is they are not being backed financially by either of these nor any major studios.
“it really should be edgier and darker” ..fear not- Universe is coming.

The first Season of Sanctuary was released on DVD in Australia today :)

maybe…if it was on blu-ray…has potential, but still not that good

Sanctuary was Wicked!!! The Red Camera broke all sorts of records. They have done alot of record breaking in the first season and for those who think it wasn’t good,……..they didn’t break records and win records etc for it being crappy. Not all Europeans speak perfectly either. So, her accent is fine with me. Amanda Tapping and Christopher Heyerdayl are wicked!! I love their acting. The others as well. It has had alot of guest actors appearing on the show that i love! Many are from Stargate, Jerimiah, Highlander, etc. Great Actors!!!! Wonderful Show and The first season gets it… Read more »