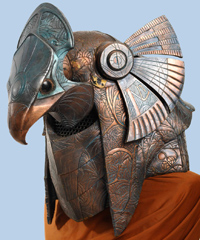 For fans of a long-lived television franchise like Stargate, opportunities like this are extremely rare.  MGM and Propworx are auctioning off thousands of Stargate SG-1 and Stargate Atlantis props, costumes, and set decoration.  The weekly auctions will run all year long, starting last weekend.

The auctions include major and absolutely one-of-a-kind items, including Thor, Ronon’s gun, the Ark of Truth, a M.A.L.P. … and the Stargate itself.

“The year-long endeavor launched this past weekend on eBay with the first auction of iconic props, hand-sewn costumes and richly crafted set pieces – all used by past characters,” the company said in a press release. “The eBay auctions will continue weekly, building to two spectacular Stargate Artifacts live auction events in August and November.”

Propworx is the studio behind last year’s acclaimed series of Battlestar Galactica prop auctions.  Where did the company turn to find an expert on all things Stargate?  Joining the team is GateWorld’s own David Read, who has moved to Los Angeles to serve as curator of the collection and help to bring these items to fans around the world.

His job is to sift through more than a decade of Stargate material and identify what’s what, how it works, and which episodes it has appeared in.

Future items include Teal’c’s Jaffa serpent guard helmet, a Horus guard helmet (pictured above), Jack O’Neill’s signature sunglasses, a Goa’uld hand device, an Ancient drone, a Zero Point Module, and full-size, light-up Stargate. Check out SciFi Wire for a look at some of these familiar props. 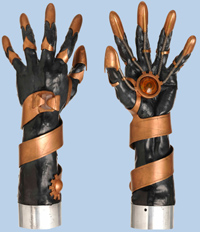 Many items are screen-used, while others were produced by the production but did not appear on screen.  These are all 100-percent authentic props, costumes, set pieces, and concept art from The Bridge Studios in Vancouver, B.C.

Auctions have already started and will run on eBay over the next several months.  To help fans keep track of auction listings and introduce them to some of the bigger items, Propworx has launched StargateArtifacts.com.  There the company is giving behind-the-scenes looks at some key items and their significance to Stargate history.

Also be sure to bookmark the primary auctions list at eBay.  Nearly 150 auction items are currently up and running, so you can bid right now!  Just a few highlights from this week include:

While the bigger-ticket items are expected to sell for hundreds and thousands of dollars, there are plenty of smaller items that should keep many auctions affordable for more thrifty fans.  And for those who just like browsing, Propworx is assembling some of the highest quality photos of Stargate props we’ve ever seen.

Keep it locked on GateWorld for more updates from Propworx as this unprecedented series continues in 2010!

NEXT: Read the complete press release

does that mean they don’t need the things anymore?? Not even for future films? :( Isn’t there always some hope!? *sigh* ..well, I think I’ll take the Stargate then.

Nobody better outbid my on that Iratus Bug!!!!

Exciting and yet, sad.

Don’t they need the stargate for the movies they’ll be filming?!?!?

this is cool and very sad at the same time – does this mean that the movies are totally dead in the water?

PLEASE tell us this DOESN’T mean there will be no SGA movies!

Are you kidding??? Selling all those stuff? Ok I understand the Jaffa stuff, but the Stargate itself?

My only consolation is that the article says that “Many items are screen-used, while others were produced by the production but did not appear on screen”…

Maybe they have multiple gates and will used another for the MOVIES which have to coume out :(((

I don’t think the movie will ever be made. At least not according to Jason Momoa. The way he describes the situation it doesn’t look like it will ever be made. There seems to be some issues with rights and allot of people fighting over money, so yeah it sounds like a big mess that will be hard to solve.

Heres the link for the youtube clip with Momoa saying what I said a little bit more detailed, it comes up 2.35 into the clip:
http://www.youtube.com/watch?v=kenDSCc9yrQ&feature=related

Seeing this isn’t a joy I hope no one buys anything unless the money goes towards the movie and people promise to lend for free any props they buy. I WANT AN ATLANTIS MOVIE!

That’s great for the fans but it’s more evidence that the atlantis movie is dead.

Well this pretty much confirms that there will never be an SGA movie, not that I believed the ptb ever intended making one. The only way I would buy any of this stuff is if the money was going to a charity.
Stargate is pretty much over for me now as I’ll never consider SGU remotely stargate.

As so many this news brings me some worries about the SGA movie. I observe the SGA probs that have been put in auction come from previous eps and some replicate uniform or from cut off from the gate during the built. But After so many conflicting declarations, so many postponements, and promises that have not been hold this could be the evidence of the death of the movie. But I want to stay positive. It could be MGM and producers don’t want anymore interested in this “High move to a big format cancelling SGA on a high note”.LOL :(… Read more »

As of this posting Daniel’s glasses are going for over $700 and Shep’s wristband for $800.
…and they think there is not enough interest in these shows…

I saw this too Sylvia.
How could they think SGA didn’t have anymore enough interest among the fans…:(
Bad thinking. Bad idea.
Bad choice from BW and co.

“Bad choice from BW and co.”

Don’t think it was BW’s decision said he said: “Honestly, I expected Atlantis to go another year, and then we’d either have another year before Universe started up or we would just wind up doing a couple of more direct-to-DVD Stargate movies.”

PISSED OFF! « Fight for Atlantis!

[…] hearing that they’ve axed the Atlantis movie?!  See here for the depressing news. Also, the Atlantis props being sold off to the highest bidder, so that’s a basically a confirmation that there will be no movie. All the while this is […]

Atlantis! I still can’t beleave it’s over! :( after only 5 seasons! I want more Stargate Atlantis! I love this show!

Anyway, this means – for me, of course – that there will be NO Stargate movies in the future at all! We are deluded completely. SO sad and shocking. Why BW doesn’t dare to tell this sad news to fans straightly? Why we have to find out this ourselves? This is unfair.:(

OMG how can they do this to us?! They go and cancel our awesome show for some stupid Stargate Voyager, they promise us a movie, and now they’re cancelling the movie too?! HOW DARE THEY. I will be sending them so much many letters, so many lemons, so many emails, so much **** that they will burn in hell. I MISS Teyla, Sheppard, Mckay, and Ronon. :< D: UGH. :(

It is apparent that whoever makes the decisions regarding the Stargate franchise is “lost in space” with their SGU ship/show…I was a huge SG1 fan and even a bigger SGA fan. To end SGA after 5 seasons was a disaster…to not make the movies…an even bigger mistake. Now they are auctioning off props??? Wow…what a slap in the face! Why even get everyone’s hopes up about the movies in the first place.