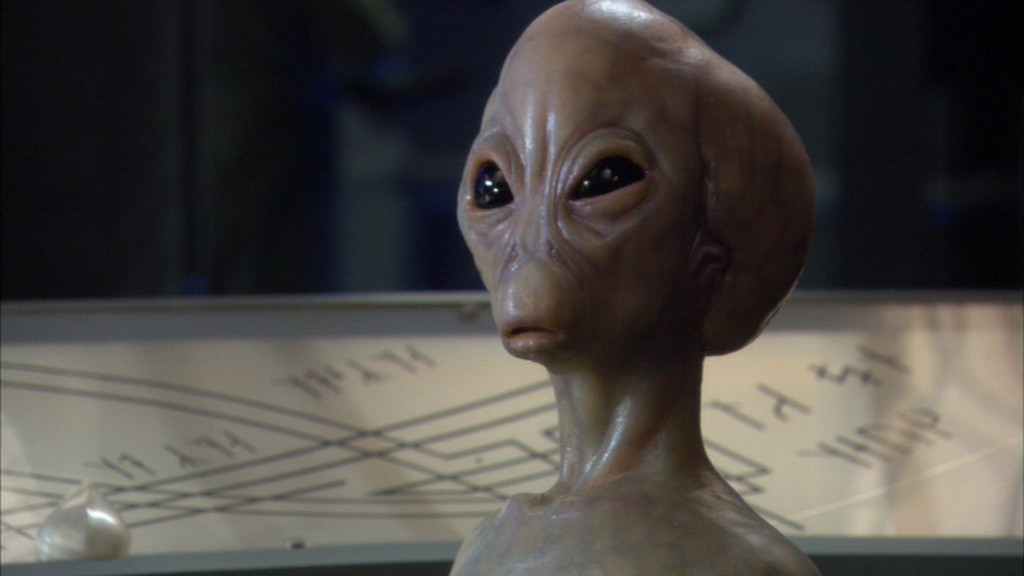 Supreme Commander of the Asgard fleet, Thor had come to the aid of Earth and the S.G.C. on numerous occasions, and asked for much in return in the form of aid against the Replicators.

Like the rest of his species, Thor was incapable of sexual reproduction and when his body died, he had to have his consciousness transferred into a new clone to survive.

Thor was made aware of the S.G.C.'s presence when they interfered with the Asgard timetable for the the natural development of the planet Cimmeria, which was under their protection. Thor took his mothership, the Beliskner, into the Milky Way to stop Heru'ur's attack on the planet. When Earth made itself a Goa'uld target, Thor intervened and mediated a summit with the System Lords, in order to add Earth to the Asgard Protected Planets Treaty with the Goa'uld.

Thor lays injured aboard the Beliskner. From "Nemesis"

Due in no small part to Jack O'Neill's experience having the Ancients' library downloaded into his mind, Thor saw in him humanity's great potential. He formed a special relationship with the Colonel, and turned to him and his team when the Asgard were in need. And when Replicators swarmed the Beliskner and set a course for Earth, Thor beamed O'Neill aboard in hopes that he could prevent the creatures from infesting the planet. Thor risked his life to try and stop the technological insects from reaching Earth, and nearly died.

With the Beliskner destroyed, Thor and the others gated to another world, and soon requested the aid of the S.G.C. once more. Thor had been impressed by the Tau'ri resistance to the bugs, and asked that Major Samantha Carter join him on his home world to aid in developing new strategies against the machines. Thor and Carter managed to draw the attention of three Replicator-infested Asgard ships away from Thor's planet with a recently commissioned vessel, the "O'Neill."

Thor finds himself a prisoner of Anubis. From "Revelations"

When Anubis returned to the Milky Way and sent a ship (under the command of Osiris) to take Asgard secrets from a hidden laboratory, Thor was sent to stop the Goa'uld. Instead, he was captured and interrogated. Anubis himself arrived, and implanted an Ancient device into Thor's brain that gave the Goa'uld vital information about Asgard technology. Thor was rescued by O'Neill and Teal'c, but not before slipping into a coma.

Thor himself was not lost, however, as his memories and conscious mind had been downloaded into Osiris' vessel. He gained a small measure of control over the Ha'tak, forcing the crew to evacuate and sending the ship to Earth. When SG-1 boarded and learned what had happened, they brought Thor's consciousness to the Asgard, who gave the supreme commander new life by transferring him into a new clone body.

Thor lends his support to the status quo at the S.G.C. From "Disclosure"

In return for all that SG-1 had done in defeating the Replicators (at least temporarily), Thor visited Earth to equip the Prometheus with Asgard shields and weapons -- and to help General Hammond gain an advantage over governments who desired to take the Stargate out of the hands of the U.S. military. Thor pressed that the gate should remain in the care of the S.G.C. -- an endorsement that carried tremendous weight with the international delegates.

As a leader among the advanced and ancient Asgard people, Thor remained one of Earth's greatest allies. However, the entire race were struggling with a massive problem. The cloning process for producing new bodies had reached a dead end. Despite extensive research on finding a solution to the problem by the Asgard scientists, such as Heimdall, there was no way to halt the genetic degradation and the Asgard were on a march toward extinction.

With this in mind, the Asgard passed on all their technical knowledge to the people of Earth in the form of a computer core installed aboard the Odyssey. Thor bade a last farewell to the members of SG-1, then returned to his world where he and his entire race died in the explosion of their home world.

Thor's Hammer - SG-1 visits the Asgard-protected planet Cimmeria, where they encounter a holographic recording of Thor -- who is impersonating a Norse deity.
Thor's Chariot - SG-1 learns the true nature of the Asgard when Thor reveals himself, rescuing the people of Cimmeria from the Goa'uld Heru'ur.
Fair Game - Thor travels to Earth to mediate peace talks between Earth and the Goa'uld System Lords, adding Earth to the Asgard Protected Planets Treaty.
Nemesis - O'Neill discovers that the Asgard's great enemy is a technological "bug," which has infested Thor's ship and taken it to Earth. Thor lays dying, trying to help SG-1 stop the Replicators -- by destroying his ship.
Small Victories - Saved by SG-1, Thor seeks help from Major Carter in defending his planet from a Replicator attack with her unusual strategies. The attack avoided, Thor pledges to help Earth in its struggle against the Goa'uld once their conflict with the Replicators has been won.
Revelations - Thor is defeated in battle by Osiris and captured. Anubis implants a device in Thor's brain that downloads his knowledge into the ship's computer. Though SG-1 rescues his body, Thor remains in a coma.
Descent - SG-1 discovers that Thor's consciousness remained behind in Osiris' mothership when it arrives abandoned in Earth's orbit. The team downloads his consciousness for the Asgard to transfer into a new body.
Prometheus - Thor finds SG-1 in deep space on board the X-303, and asks for their help in saving the Asgard homeworld from the Replicators.
Unnatural Selection - Thor sends SG-1 on a mission to trap the Replicators on their homeworld by reactivating a time-dilation device.
Disclosure - Thor visits Earth to install Asgard weapons and shields on the Prometheus, and to entreat other government of the world to leave the Stargate program in the hands of the S.G.C.
Fragile Balance - When SG-1 finds a rogue Asgard scientist, Loki, conducting experiments from a ship in Earth's orbit, they call on Thor to take him into custody.
New Order, Part 1 - Thor rescues Teal'c and Carter from a black hole, which the Asgard have just created to try and destroy the Replicators -- without success.
New Order, Part 2 - Thor saves O'Neill from the Ancients' knowledge in his head, and helps the team rescue Carter and defeat a Replicator invasion of the last Asgard planet.
Ripple Effect - Occupied in urgent matters with Heimdall, Thor sends his regrets for not helping Stargate Command. Instead, Kvasir is sent in his place.
Unending - Thor oversees the installation of an Asgard computer core in the Odyssey, then takes his leave of SG-1 when the Asgard destroy their civilization.