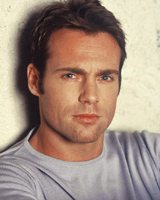 How many television shows filmed in Vancouver will Michael Shanks pop up on this season?

It’s a legitimate question, as details have emerged in regards to the veteran SG-1 actor doing a guest spot on the CW Network series Supernatural.

Details are scarce at this early point, but early reports from TV Guide say that Shanks will play a character named “Rob,” a member of a local militia who, after suffering a loss in his family, will dedicate himself to the cause of the Winchester brothers.  There is no word as to whether the guest spot will be a one-off stint or a possible recurring character.

The episode is titled “99 Problems” and the role isn’t a big one, Shanks told his official Web site.

The news comes as fans of both Michael Shanks and fellow CW series Smallville are anticipating the actor’s appearance in that series — a special two-hour movie event scheduled to air on the CW on Friday, February 5 (story).  The actor will play the legendary DC Comics hero Hawkman.

Keep watching GateWorld for more updates on Shanks’s guest appearance as we receive them!

@Siba: Thanks for sharing. Some people do, some people don’t. Isn’t it nice that you can choose which shows to skip? or even which stories on GateWorld you bother to read? :)

Excellent news! I’m really looking forward to season 5 airing here in the UK. Even more so now hearig about all these guest appearances from Stargate cast.

I love Supernatural. Looking forward to it. And Shanks isn’t the only one who has guest starred. Sgt Siler, Major Lorne, Peter Grodin and I’m sure other stargate characters, have popped up now and then. All small parts, but why not. Both shows are in Vancouver. If you can get the work, I say go for it.

Makes sense! Every actors and actresses in Canada has already made the round on this show.

@colored_blocks: You say it, and isn’t it nice that your post is even more useless than mine! If we’d all just read what concerns us and talk about what we like…we wouldn call it appreciation talk and not discussion.

“I don’t watch supernatural” is a statement that does have it’s right to stand there. If you choose to read it you did, if you don’t, you don’t. Thanx that you bothered to read it.

@Siba Well we sort of have to read it, since it was hard to miss so I’m continuing this interesting thread ;-) I watch it sometimes (if anyone cares) and will make sure to catch the Michael Shanks episode.
@GateWorld – thanks for posting news about the (SG) actors, I for one really appreciate this.

I understand and I’m sorry for everybody I disappointed with my statement. It would have probably looked better if I had added “:(” I was assuming everybody who’d read the article would share the interest in M Shanks and so understand that my sentence wasn’t ment to insult but to say that I don’t watch the show and so even if I watch this episode, I’ll certainly not understand everything. The next thing is that I’m not from the US and that makes the whole thing even more complicated. So guys, don’t kill me because I forgot to add the… Read more »

Michael Shanks is a great actor, I believe he will contribute a good deal to the Supernatural series…But I cant wait until the third SG1 movie!!!

Good news to me. Supernatural is one of my favorite shows. Not sure about the recurring character part as this is the final season of the show, unless he’s in the last few episodes of course.

This should be interesting, I’m looking forward to it.

On a side note: If TPTB for SGU want to learn what a good balance of angst and sci-fiish fun is they should watch SPN. SPN can rip my heart out one minute and have me laughing my butt of the next and scared out of my wits the next. SPN rules at character development without a soap opera vibe in sight.

@Lothar this isn’t for sure the last season. There is a chance they my be renewed. (a good chance actually) The boys are already signed up for a sixth season if its renewed. This *is* the final season for this particular story arc though.

OMG OMG OMG there’s going to be a 3rd SG1 movie..I sooooo cannot wait for that. I have to say I’ve watched a Supernatural and wasn’t that impressed but if the ever gorgous MS is going to be in it my eyes will be glued to the screen

With no new SG-1 or Atlantis, Supernatural is the best series on TV. Have to catch it from the beginning to fully get the back story, but there are enough stand-alone episodes for the occasional viewer.