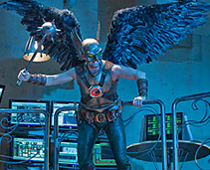 UPDATE:  The 2-hour movie event has been renamed Smallville: Absolute Justice, according to EW.com.

“When we first meet Carter Hall he’s in his museum,” Shanks said. “We’ll learn he’s a reincarnated prince from a thousand years ago. There is a reference to The Justice Society’s time in the ‘70s, but we have since disbanded.”

Shanks talked about the role on stage at the official Stargate convention in Los Angeles last weekend, telling fans that  the costume’s wingspan measured in at 13 feet.

The two episodes, titled “Society” and “Legends,” will air February 5 as a special movie event on The CW in the United States, according to TV Guide.  The episode will also feature former Stargate guest stars Brent Stait (“Ferretti”) as Dr. Fate, and Brittney Irvin (“Merrin”) as Stargirl.

The role allowed Shanks, who for years played a wide-eyed optimist in Daniel Jackson, to tap into his gruff and cynical side.

“When we first see him, he is a shell of his former self with a heir of cynicism,” he said. “He wears a lot of grief and guilt and pain over what happened to his friends and the society as a whole and his failures in letting that happen.”

Check out TV Guide Magazine for the full interview, and a larger version of the photo above!

I’m sure that in the years to come, Michael Shanks will look back on this and think “It seemed like a good idea at the time.”

Huh, I suddenly get the flash gordon tune in my head.

Go Michael! Looks like the episode is gonna be a lot of fun!

Oh wait, its from Smallville.